THE COMPLETE ALICE IN WONDERLAND 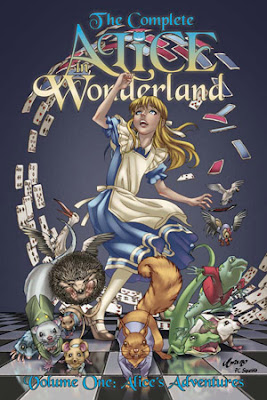 By Chris Wilson
Editor-in-Geek
REVIEW
How does one go about reviewing a well-crafted book that one finds absolutely unappealing? It’s a quandary, to be sure. I shall make the attempt anyway.
It only took 14 pages of narrative for me to realize Lewis Carroll’s stories of ALICE are not my cup of tea. At this point, Alice swam to shore only to endure the clothes-drying attempt of Mouse’s through dreary stories.
“Sit down! Sit down, all of you and listen to me! I’ll soon make you dry enough. This is the driest thing I know. [ahem] ‘William the Conquerer, whose cause was favoured by the Pope, was soon submitted to by the English, who wanted leaders ... and had been of late much accustomed to usurpation and conquest.”
Dry indeed.
Oh, now, the comic adaptation is interesting enough. The art is beautiful and the text is faithful, but I could not help wonder if modern children would actually find Alice as intriguing as the youth of yesteryear. Frankly, I could not abide much more, but I forced myself. I found the story entirely repetitious what with all the recitations, growth spurts, shrinkages, and nonsensical nowhereness.
I know there is literary merit enough in the original text to choke a horse. I’m not arguing it’s a bad story or a poor adaptation. I took plenty of notes and I could write a paper on it, but why in the world would I want to? In other words, I’m simply stating that I find the classic story incredibly dull and wearisome and I cannot imagine students finding it as interesting as they might hope, even as creative as the comic adaptation is. Unfortunately, this proved true for my fourth grade students who checked it with high hopes only to give it back with the same feeling of tedium I had experienced.
That’s hardly a fair review for Dynamite. The quality of the comic is wonderful and the dustbowl experience with the original story is no reason to punish the comic.
AGE RECOMMENDATION
Chris’ Rating: Ages 10 and older
Publisher’s Rating: All ages
There is nothing inappropriate in Carroll’s story or the comic adaptation and it is appropriate for all ages; however, the language is archaic and difficult. Elementary and even some middle school students might find it troublesome and may require assistance.
IN THE CLASSROOM
So I am not into Alice. Well big deal. The comic is still worthy of classroom inclusion. Kids know the basic story even if they do not know specifics. If students find the story as boring as I do, a forced reading of the entire novel may lead to revolt, in which case the comic adaptation might be more advantageous. That is, unless it turned kids away from the comic format altogether. Perhaps, Alice is not the best story to teach at school.
OTHER INFORMATION
Original Author: Lewis Carroll
Adaptation by: Leah Moore and John Reppion
Illustrator:
Pencils: Erica Awano
Colors: PC Siquiera
Publisher: Dynamite
Genre: Traditional literature in comic format
Format: Hardcover
Pages: 88
Color: Full color
ISBN-10: 1-60690-085-4
ISBN-13: 978-1-60690-085-7
CHRIS’ RECOMMENDATION:
Appropriate
Despite my personal dislike of the original story, it is not entirely fair to give any kind of recommendation to the comic (or the original for that matter). Both have their place in the library. You need to read it for yourself. Perhaps a lover of ALICE can make headways with it where I was unable.
Posted by Mr. Wilson at 10:28 AM