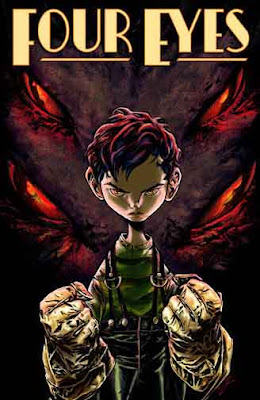 By Chris Wilson
Editor-in-Geek
STORY SYNOPSIS
In the midst of The Great Depression, 10-year-old Enrico and his family fight for basic needs: food, shelter, water. Jobs are rare and fought over. Enrico’s father finds work but his wife is none to happy about it because Papa works for the suave, smoking, John Water’s looking Christoforo Boccioni. Papa extracts dragon eggs from the cave dwelling beasts for the purposes of fighting and gambling and moneymaking.
One afternoon, while on a rare family outing, Papa disappears to work a job. Enrico follows and witnesses the burning death of his Papa at the hands of an angry fire breather. The boy of the house becomes the man and insists on a job hunting dragons for Boccioni. It is revenge the boy seeks.  During his first campaign, Enrico is trapped in the cave, barely surviving the ordeal by hiding in the mother dragon’s dung heap. There he finds the discarded and disabled four-eyed dragon.
REVIEW
FOUR EYES is a mix of history and fantasy narrated by the much-too-young Enrico. His rapid transformation from boy to man is signified by the cover art depicting Enrico donning his father’s warm work gloves. It is a sad tale for us and for Enrico, but he forges on to build a life and take care of his rather weak-minded and pitiful mother. She stands aside while their boarder, angry with Enrico for awakening the day-sleeping man, attacks the boy. She says nothing and does nothing.
If it is to be done, if they are to be safe, then Enrico will do it. He cannot depend on his mother for much more than tears and hugs. Fortunately, Enrico is watched by one of Boccionoi’s supervisors, Fawkes. While Enrico is trapped in the cave, Fawkes delves the depths to find either the boy or his remains. What he finds is a boy and a discarded dragon spooning together in the dung for warmth and protection. Against Fawkes’ better judgment he allows the boy to emerge from the cave with the four-eyed dragon. The two children, Enrico and the dragon baby, bond in the dung heap and Enrico learns that he is “the king of the castle. And it is my job to protect it [the dragon]. And I will protect it as my father did. I will protect the castle from monsters … with a dragon.”
The art is bloody and brooding. People are burned and halved and destroyed. Fights are conducted and bets placed. The carnage of the historical time and the fictional place are powerful and tragic. The set-up for the next volumes leaves the reader with images of future destruction.
The boy who emerges from the cave is not the same as the one who went seeking his father during their family outing. It is his transformation that creates the engagement for the reader.
ART REVIEW
The art is very graphic and blood-thirsty, but also quite compelling. Most of the panels and pages are placed onto black backgrounds not white and much of the story takes place in dark places and black spaces. The front cover is initially what made me purchase the book, but its greatness is not exclusive. The splash page of Enrico cuddling in the dung with the baby dragon is at the same time disgusting and reassuring.
AGE RECOMMENDATION
Chris’ Rating: High school and older
BE AWARE
It is a bloody, gangster-inspired comic.
IN THE CLASSROOM
I could see FOUR EYES used in conjunction with traditional novels to explore certain themes: the parentified child, disability studies, and even Italian or Italian-American stereotypes. The monomyth and its cave imagery is overt in FOUR EYES.
OTHER INFORMATION
Author: Joe Kelly
Illustrator: Max Fiumara
Colors: Nestor Pereyra
Lettering: Drew Gill
Publisher: Image Comics
Genre: Fantasy
Format: Softcover
Volume: 1
Pages: 96
Color: Full color
ISBN-13: 978-1-60706-292-9
CHRIS’ RECOMMENDATION:
Recommended
I like dragons, dragon stories, and stories with child protagonists. FOUR EYES is gory and dark and –– despite its fantasy themes –– is not far removed from the horrors of real life or real poverty, or real seedy underground goings-on. I think for those reasons students would love it.
Posted by Mr. Wilson at 10:43 AM