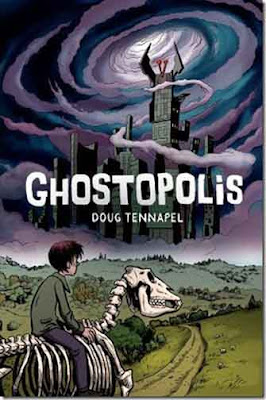 Second grade student, Brock, could barely contain himself when his fourth grade brother was accepted into the Hall of Heroes comic book club at my school. He wanted to read what his big brother got to read. At first, Roman lent Brock some comics, then Brock begged to be able to check out comics himself.
A softy for the excited reader, I granted Brock access and he's been reading comics since late September. It was not until he grabbed up GHOSTOPOLIS that his inner writer kicked in. Something about the skeletons and magic and mysticalness of GHOSTOPOLIS fueled his spirit. He wanted to write. I told him if he wrote a book report then I would publish it. Two days later came the following handwritten report on a book that is meant for kids older than he.
Receiving early praise from comics educators such as Kate Monin, GHOSTOPOLIS was also a huge hit with the Hall of Heroes members. They fought over it, traded it, read it together and checked it out with greased-pig speed. From both ends, this comic has found an audience.
Nothing is left for us to do but to Highly Recommend it.
OTHER INFORMATION
Format: Softcover
Publisher's Recommended Age: Ages 10 and older
My Age Recommendation: Ages 10 and older (parent permission for younger kids)
Posted by admin at 11:47 AM