BINKY TO THE RESCUE 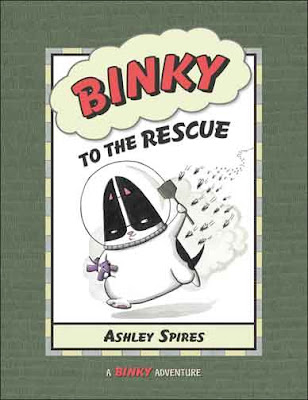 By Chris Wilson
Editor-in-Geek
STORY REVIEW
One November evening our old college theater friends decided to go back to the Alma Mater to see a performance of the musical production Company. As social and outgoing as I am, there are days, weekends – entire weeks actually – that I simply can not bear being bothered by hoards of people even people for whom I have a strong affection. One couple drove almost four hours to attend and did not have childcare. So I volunteered to watch the toddler, who slept the entire evening, and the 7-year-old.
Sam and I played the requisite Wii marathon full of Lego Indiana Jones and Lego Star Wars. He looked at my samurai sword and my old toys. As midnight approached we sat on the couch together, my 7-pound Yorkie-Bichon mix sprawled over Sam’s legs, and we read comics.
Sam lives sans canines but has cats, so I pulled down the only cat comic I had at home –– a book I had been meaning to read and this seemed the right time. Just as I guessed, BINKY TO THE RESCUE was a hit.
Binky is a space cat (average house cat) living on a space station (a normal human home) and is charged with protecting the indigenous population (his humans) from alien invasions (bugs, bees, flies and whatnot). He takes his job quite seriously.
One day he accidentally fell through a space hatch (window) and was trapped in outer space (the yard). Fortunately, Binky procured an oxygen source (water hose) before he was attacked by space aliens (bees) protecting their mother ship (bee hive). In his haste toward safety (the house) Binky left behind his only team member (stuffed toy mouse). As any good military officer knows, you cannot leave a comrade behind. Binky conceived and executed many plans to save Mouse, most of which were thwarted by the ignorant humans.
Even nearing midnight, Sam giggled his way through the comic. In Captain Underpants fashion, Sam broke out in hysteria every time Binky tooted –– and Binky tooted a lot. Sam delighted in each attempt Binky made to save Mousie.
BINKY TO THE RESCUE is as adorable and priceless as the first book in the series. It is a tad long for a book for little ones, but is worth every darling little page turn. BINKY just makes you want to own a cat or more cats.
ART REVIEW
BINKY has a very muted color palette that reminds me of many of the old Winnie the Pooh stories. The illustrations carry semi-detailed backgrounds without clutter making it easily accessible to young brains.
AGE RECOMMENDATION
Chris’ Rating: Ages 7 and older
Publisher’s Rating: Ages 7 to 10
IN THE CLASSROOM
BINKY is all about the coexistence of play-pretend and real life. I can see a lower grades teacher using a document camera to display BINKY on the wall and use it as a real aloud. I would certainly stop periodically and ask students to predict what will happen next. To incorporate writing, the students could even write what will happen next. Then back at the carpet to find out what really happened.
Older elementary students, grades 3-4, could even create their own pet comics using BINKY as an example. To further the classroom curriculum, the students could be required to use one or more of their weekly spelling words into the narrative. This allows the teacher to check those vocabulary words for both spelling and context, while also supporting other Com Arts standards.
OTHER INFORMATION
Author & Illustrator: Ashley Spires
Publisher: Kids Can Press
Genre: Animal Fantasy
Format: Hardcover
Volume: 2
Pages: 64
Color: Full color
ISBN-10:
ISBN-13: 978-1-55453-502-6
CHRIS’ RECOMMENDATION:
Highly Recommended
Posted by Mr. Wilson at 10:37 AM