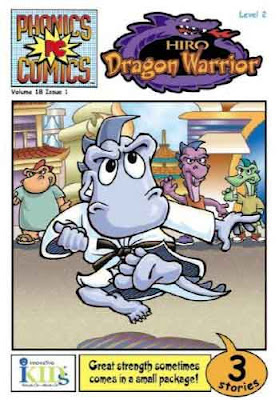 By Kevin Hodgson
Staff Writer
STORY REVIEW
This short graphic novel is one of a series that is being put out by Innovative Kids under the banner of Phonics Comics. HIRO: DRAGON WARRIOR tells the story of a young dragon, Hiro, who must learn the ancient ways of the Dragon Claw dojo (taught by the patient Master Fu). Hiro is sent on a quest by Master Fu to recover seven Power Jades that were once stolen by the nemesis, Master Gomi. Along the way, Hiro recruits his former bullies to become his allies and uses his new understanding of harnessing his fears and intelligence in the midst of battle.
While the story is predictable to anyone who has ever seen The Karate Kid, the story moves along at a brisk pace and we do cheer Hiro on when he confronts the enemy and has to use his wits to survive. HIRO: DRAGON WARRIOR is a perfect book for a beginning reader, who will surely be hooked by the pint-sized dragon who overcomes the odds. The second volume of the series – BATTLE AT MOUNT KAMADO – continues the quest for the other lost Power Jades, and I expect there must be a handful more HIRO:DRAGON WARRIOR books in the pipeline. Unlike some of the other novels in this Phonics Comics line that I have bought for my young son where the story seems secondary to the art, HIRO:DRAGON WARRIOR is coherent and easy to understand.
ART REVIEW
The book is colorful and simply drawn, with enough energy to excite and spur on even reluctant readers. Illustrator Robbie Short doesn’t break any new ground here, nor should he. Hiro and his band of young dragons are cute, and even Master Gomi, the villain, is not all that scary. It’s a nice mix of cartoonish illustrations in a graphic novel setting.
IN THE CLASSROOM
Since this series is designed around phonics, there are plenty of ways HIRO: DRAGON WARRIOR could become a popular staple of a classroom library. I liked that the publishers provided a list of words on the last page of the book that are considered challenging for the reading level and also a list of sight words that readers should see frequently enough to know on sight. The editors also provide a nice introduction to the phonics-based graphic novel at the start of the book, which I think can be beneficial to parents who are reading HIRO: DRAGON WARRIOR with their children.
MORE INFORMATION
Reading level: Ages 4-8
Format: Paperback
Pages: 24
Publisher: Innovative Kids
ISBN-10: 1584766166
ISBN-13: 978-1584766162
MY RECOMMENDATION
This graphic novel is perfect for the emerging reader and I would highly recommend it.
Posted by admin at 11:22 AM