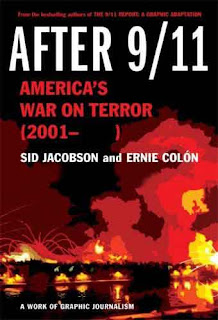 
STORY SUMMARY
Labeled "A Work of Graphic Journalism," this book by Sid Jacobson and Ernie Colón is a modern perspective of the events that followed the terrorist attacks of September 11, 2001 that started a domino effect which led the United States military into the War in Iraq and other fronts. (Jacobson and Colón also collaborated a well-received graphic interpretation of the report of the 9/11 Commission that investigated how those terrorist attacks happened and could have been avoided). Overflowing with facts and figures and following a series of strands of the most powerful country in the world seeking revenge and protection against terrorists, AFTER 9/11: AMERICA'S WAR ON TERROR (2001- ) is a fascinating and intriguing companion to the reality that continues to unfold each day in the daily news.

We not only see the actions of President George Bush and his administration as they first work to galvanize public support for overthrowing the Taliban government in Afghanistan that is harboring Osama bin Laden, but we also get a glimpse at the ways in which they presented their case for the invasion of Iraq. Although Jacobson and Colón seem to strive for fairness and balance, it is clear that President Bush gets the short end of the stick here (as do Vice President Richard Cheney and former Defense Secretary Donald Rumsfeld). But Bush and company are often done in by their own words, as Jacobson and Colón use passages from speeches and interviews for much of the dialogue. Or so it seems.

The major weakness of AFTER 9/11: AMERICA'S WAR ON TERROR (2001- ) is the lack of references for the material, including the various data polls presented to demonstrate the public support for the operations in Afghanistan and Iraq. There's nary a citation in sight. (One other complaint: the book would have been well-served to have a timeline handy, as it is hard to track the actual year in which the events are taking place. I, for one, would have liked a little number on the corner of the page to remind me of the year.)

On the other hand, Jacobson and Colón are not afraid to take a narrative detour here and there to explain to the reader the various ethnic make-ups and the historical backgrounds of the regions of the Middle East and these asides are a welcome addition to the story they are telling, providing crucial perspective. And the use of moving several narratives forward together gives the reader a broader tapestry with which to view the many fronts of the campaign to stop terrorism. Thus, we learn about the train bombings in Spain, the anthrax letters in the United States, the abuses at the Abu Ghraib prison (and lack of accountability), and the ever-shifting allegiance of Pakistan.

The authors acknowledge that the story continues on and the epilogue briefly moves the reader into June 2008 (when yet another commission determines that the Bush administration misused intelligence information in its push for the invasion of Iraq). To learn more of this particular story, turn to your local newspaper.


ART REVIEW
Colón, the illustrator, uses a very traditional approach to the artwork in this book. It "feels" like a comic book. (No surprise here: Jacobson was the managing editor of Harvey Comics and an executive editor at Marvel Comics, while Colón worked as an artist at many of the major comic houses, including DC, Marvel and Harvey). The many renditions of prominent politicians are effective, as are the faces of ordinary people and soldiers who are caught up in the events. The artwork successfully brings us into the action, for good or bad, and tells as much of the story as the words. At times, Colón seems to shift from pen drawing to computer-assisted art rendering of photographs, which is slightly jarring. It may have been a stylistic decision, or perhaps the authors had a deadline looming. For example, it seems strange to begin the book with an original comic drawing of President Bush and end it with a photographic image of him. The pages are a bit crowded, too, packed with information that can sometimes cause some confusion with the narrative. More than once, I had to backtrack and make sure I was reading in the correct sequence.


IN THE CLASSROOM
This book could provide a crucial lens into the modern world that has come to be defined not only by terrorist attacks, but also by defense against terrorist attacks. I would not suggest this book be the one and only source of information for the reasons why our country is at war in Iraq and continues with military operations in Afghanistan, but it does provide a unique look at the rationale, reasons and rhetoric behind those military operations and showcases both the failures and the successes of decisions made by political and military leaders.

As noted above, the authors are wise to weave in some history lessons about the people and regions of the Middle East so that readers get a broader sense of the people whose lives have been changed by these events. This might provide a launching point for students to gather more information about the countries of the Middle East and move beyond stereotypes.

The rhetoric of politicians is on full display here, and students would be well-served to examine the choice of words and why this is important on a political stage. I think it would also be fruitful for students to examine the evidence presented by the authors, and do corresponding research to determine the veracity of the information (and provide citations). Or perhaps, students could create their own graphic interpretation of the events from the view of President Bush and think about how that might be different from the story presented by Jacobson and Colón. In this end, this book may provide another way to evaluate the place in history where President Bush belongs.


KEVIN’S RECOMMENDATION
I highly recommend AFTER 9/11: AMERICA'S WAR ON TERROR (2001-) for upper high school students and beyond, with some reservations. Obviously, this book deals with war and terrorism, and Colón's illustrations often show violence as a backdrop to politics. We see executions of Iraqi police officers and others; violence on the streets; bombing raids; dead bodies; and more startling images throughout this book. These illustrations are not done for shock-value, but more to show the reality of the situation. Still, this book is not for the feint of heart. There is no profanity or inappropriate language, unless you count political rhetoric.