THE MERCHANT OF VENICE 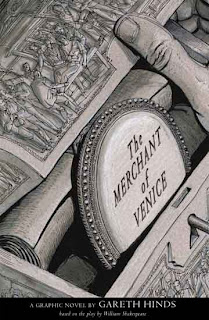 
ACT I: SYNOPSIS
You ought to know, methinks. But lo!:

Here is the tale of young Bassanio, who, to win the love of fair Portia, entangles his dearest friend, Antonio, in a dangerous bargain with the moneylender Shylock. Only Bassanio’s heartfelt efforts — and a clever intervention by Portia — will save Antonio from paying Shylock “a pound of flesh.

ACT II: BAGGAGE
Shakespeare has weathered countless adaptations into prose, comics, new-theater, and films – and most of the time with mixed reviews. Generally, these efforts come of rash underlining and focus on just one of a multi-thematic reading, and consequently forget that —let’s say — the boy Hamlet’s rage conveniently dissects the royal-line from Denmark, or that Fortinbras had crossed the border with an army. While a little less popular, THE MERCHANT OF VENICE has been hammered into film history (at least six by my count!) and multiple retellings (like Arnold Wesker’s play THE MERCHANT), and — like here — into its second graphic novel.

Part of my collection-development plan here in Bradford is to punctuate a wicked-awesome graphic novel section with classic adaptations; while I don’t foster any illusions about making unaware youngins fans of The Bard, I do think it’s important to make available certain canonized works in fresher mediums – if available. I did the same with Beowulf, as it — like Shakespeare — is almost always force-fed through a dated edition to sophomores who couldn’t give a damn. Archaic language does of a student an enemy make, anon. I am, however, skeptical of adaptations, but because I had already just a solid experience with Gareth Hinds, I jumped on THE MERCHANT OF VENICE.


ACT III: THE REVIEW
I wasn’t disappointed. Highly stylized, Venice is re-imagined as an archipelago the shape of cannibalized trout and an eel, modernized, which reestablishes the otherworldliness of much Shakespeare, now almost 500 years removed, wherein readers are forced to accept that the worldview of the characters is not our own. Okay, so that’s probably reading a little too much into it, but not by much.

In the art is an element of a Greco-, 1930’s-Mob-fantasy, which — really — is pretty eye-appealing. Also, it successfully communicates a world not so removed, but one wherein it’s common place to have skulls in treasure-chests and to pay debts in flesh. Whereas Gareth Hinds’s BEOWULF is wonderfully detailed and painted, MERCHANT is sort of a preliminary sketch. The detail is on par and it is drawn in blues and whites, wisps of ink hover on the structures and scalps to illustrate a sometimes sparse, raw city. The effect is almost like a film noir, appropriate for trench coats and fedoras, the suspenders and the grays of morality … oy, too heavy? Click here, here and here for sample pages. In his afterword, Hinds immediately makes clear what his interests in Merchant are:

The MERCHANT OF VENICE is a controversial play. Was Shakespeare racist, or is the play a commentary on racism? Is it anti-Semitic or anti-Christian? What are we to make of the overtones of homosexuality?

Coupling facial expressions and generally modernized dialogue makes Bassanio’s anti-Semitism (or Jessica’s betrayal or Shylock’s rage) all the more poignant and the comedy — while sometimes super funny ha-ha — is almost disturbingly out of place like cracking open a beer at a funeral. Hinds’ ability to visually contrast snickering and pain within a single panel emphasizes the social questions MERCHANT raises. Its focus is a juvenile romance where inequality and reciprocal vengeance take center stage.

But, um, the language is sometimes a little goofy. That was my main complaint about Hinds’ adaptation of BEOWULF, in which the dialogue was a stilted copy of a dated translation of the poem. Some Thous and Thees intermingling modern prose made the archaisms extra bizarre. MERCHANT is thankfully a little better about that, but the tendency for Hinds to drudge-up a “Thou Art” makes for necessary twitches. Since many of Shakespeare’s monologues from this play are highly memorable, the biggies are written in full, iambs and everything.

You may perceive a gradual shift through the course of the book from simpler, more modern prose to unedited Shakespearean verse. This is partly a sneaky way to get readers comfortable with the language, but mainly it is because the most famous speeches in this play occur near the end, in the court scene, and I wanted to preserve those in the original verse as much as possible. – Gareth Hinds

The effect is a little weird.


ACT IV: AGE RATING
My Rating: High School
Publisher’s Rating: Ages 12 to 17
Of course, the language is never foul, but it does deal seriously with racism and biased law and pranks at others’ expense, and gender inequality, and sexual nods aplenty, and classism and so on ad nauseum. What with potential for multiple reads, Gareth Hinds’ adaptation is an honestly worthwhile supplement to the original work. Dialogue-heavy and not particularly action-packed, this graphic novel functions more on the level of a daytime soap, and it is hard for me to imagine a sincere interest from middle-schoolers or below in Hindspeare.

ACT V: ALA YALSA
The Young Adult Library Services Association has nominated THE MERCHANT OF VENICE for the Great Graphic Novel For Teens 2009 award.


EPILOGUE: MICHAEL’S RECOMMENDATION
Highly Recommended
After BEOWULF, I thought pretty highly of Gareth Hinds; I think higher now. His attention to the original work and his artistry is just top notch. As a serious supplement to the play, THE MERCHANT OF VENICE graphic novel is an example of a high-quality adaptation from classic literature. I recognize that as comics become more acceptable in the classroom, this trend has seriously increased the selection of remakes available nowadays. Some, like — IMHO — THE HOBBIT graphic novel, still have a ways to go.