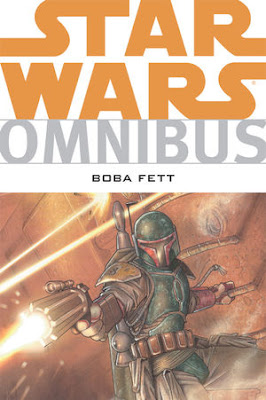 STORY SYNOPSIS
Dark Horse, the purveyor of Star Wars comics for several years, finally released an all-Fett volume collecting nine of the bounty hunters’ great stories from years past. With such a volume comes a plethora of writing and artistic styles – some more serious and in-depth while others offer more comic relief. The stories begin approximately three years before the Death Star was destroyed (known as the Battle of Yavin) and continue along the continuum 10 years after the Battle of Yavin.


A REVIEW AND A DISCUSSION FOR CLASSROOM USE
When I was in second grade everyone was talking about the newly released THE EMPIRE STRIKES BACK, and one character in particular made for wide-eyed discussions within my boy circles: Boba Fett. He was so cool and mysterious.

STAR WARS OMNIBUS: BOBA FETT tells of the merciless, credit-driven Mandalorian-wearing mercenary taking jobs – any jobs – that pay enough for his reputation. The very nature of his vocation lands Fett in many precarious situations including a one-on-one battle with Darth Vader for a magical and coveted siren-song prize in which Fett’s character and resistance is stronger than Vader’s. To do battle with Vader and live another day is a testament to the reason why his father’s DNA was cloned to create an army. Remember that Boba is a perfect clone to his father, Jenga.

The omnibus is an action-packed chronicled story of Fett which is sure to delight fans of the series and entice reluctant readers to literature, which is a key component to reading motivation. The literature review in my graduate seminar paper (available in the sidebar) told of a story of a student who quit reading sometime in sixth grade. He was an avid reader of STAR WARS novels only, but he read them with intensity and furvor. He read because he loved it; however, his teacher chastised him for engaging in what has erroneously been dubbed by many teachers “not real literature”. The boy stopped reading and did not read for enjoyment for the rest of his life. The story is not new and not unique; it has happened with novels and comics and magazines.

With STAR WARS OMNIBUS: BOBA FETT we have a chance to change the attitudes of students by encouraging them to read by giving them titles that are interesting to them. At nearly 500 pages, the story is worthy of studying, discussing and even testing.

Many stories have clearly established characters of good or evil. Others, however, are more ambiguous and BOBA FETT allows the readers to explore grey characters and understand the role those persons play in literature and in life. Because students are so familiar with the Star Wars mythos, but not so familiar with Fett himself, BOBA FETT gives depth to the entire Star Wars universe. Teachers could make show clips from the movie or Cartoons and students could use the movies as resources to reinforce their discussion questions.


ART REVIEW
It is difficult to critique a volume in which the art is from different periods. The reading experience can be discombobulating for some and rich for others. For me, and I suspect for most students, the art of the comics published years ago is less appealing and harder to read. The more modern art renders are easier and more accessible. On the other hand, the stories are compelling enough, that the art can be overlooked as an inconvenience rather than a distraction.


There is nothing inappropriate in STAR WARS OMNIBUS: BOBA FETT with the exception of a couple of minor curse words. The women in a couple of stories are dressed similarly to Princess Leia when she was a slave to Jabba the Hutt. The sheer depth of the stories might be difficult for some tweens.

CHRIS’ RECOMMENDATION:
Highly Recommended  Star Wars is a natural beacon of literary interest for students, especially boys. Children are introduced to the story in the primary grades and the love of the Star Wars universe continues into adulthood. Its inclusion in the classroom is apparent and necessary, especially for certain students who may read little to nothing else. There are strong literary themes present in the mythos to warrant study from the elementary to the college level.

I made STAR WARS OMNIBUS: BOBA FETT available to my fourth graders in the comic club. Since we started in September, the book has been continually checked out.
Posted by Mr. Wilson at 11:49 AM