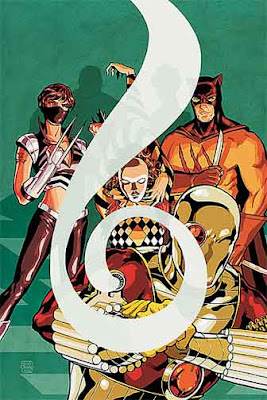 The Secret Six (Catman, Deadshot, Scandal Savage, Bane, Jeannette and Ragdoll) are misfits to be sure. They have fought everyone under the DC sun, good and bad. A band of hired capes, they do what they can to survive and make their way.

But this job, this job my friends, tests them beyond their limits. They are hired to extract Tarantula from prison, retrieve an artifact of great worth from Tarantula’s possession, and deliver that object to Gotham City for a massive payoff. The item of ultimate worth is a get-out-of-hell-free card. Seriously. The owner of the card gets to, upon death, bypass hell and Satan despite his or her transgressions. Priceless.

Everyone, and I mean everyone, wants the card and will do anything to get it including the betrayal of friends and team.


REVIEW
The promo on the back cover of SECRET SIX sums it all up succinctly: “Thugs. Killers. Maniacs. And they’re the good guys.”

Comic Book Guy is my pusher and I am one of his many junkies. Yes, my friends, I am a shameless addict jonesing for the next comic fix. Most of the time I enter the store in full-on teacher mode, but periodically I come in needing a special not-for-school hit of the really good stuff, his private stock, his hold-back.

When Comic Book Guy stops to tell you about a title he does not do so willy-nilly. He is thoughtful and reflective, contemplating stories that will interest his particular users. He knows his junkies well and when he says you need to buy a title, it is not suggested flippantly. He has not been wrong yet and I trust his judgment.

Knowing my penchant for the dark and the disturbing –– the PULP FICTION or SILENCE OF THE LAMBS of comics as it were –– Comic Book Guy had ready a suggestion: SECRET SIX. He smiled, which he does not often do, while describing the gory details and the back-story. He kept coming back to one character in particular … Ragdoll, a word he whispers every so delicately with a nasty smirk on his face and a shudder of his shoulders. If you pick up SECRET SIX for no other reason, you should do so just to experience Ragdoll.

Ragdoll and his sibling, Junior, are some kind of disturbed, messed-up poobahs. Ragdoll, in an attempt to please his demented father, underwent disfiguring surgeries to make him a contortionist. Ragdoll also had his genitalia removed.

The truth is, the characters in the SECRET SIX all have their neuroses and are not what anyone would consider heroes. This unseemliness is exactly what draws me to the story. The psychological aspects of the team are fascinating. Gail Simone’s understanding of depravity is brilliant and, quite frankly, is scary as hell. I love it.

The elementary teacher in me looks at these characters and wonders what they were like as children. Who were they? How did they behave? Did their teachers know something was wrong? Let’s face it, characters like this don’t just pop up over night.

Make no mistake –– this title is not for children. Period. If you enjoy nefarious and mischievous stories then SECRET SIX is a must-read. If you do not, then stay away … far, far away. If you do delve into the realm of the unsavory, you will find yourself addicted and wanting more. There is plenty of Simone’s SIX to read.

ART REVIEW
Bloody, dark, grotesque American realism at it’s best. The text and art are beautifully interwoven in this piece.


BE AWARE
Did you read the review above? You need to be aware of everything in this title.

Two major themes of SECRET SIX are redemption and coveting. Everyone seems to be doing a lot of both. That is to say, they covet the card and, by the very nature of needing the card, are seeking some redemption from their crimes against community and humanity. It is interesting to see the lengths someone will go to for redemption –– absolution. Not that they seem to be seeking forgiveness, mind you. It’s all very interesting and it would be fun to extrapolate it out, applying this story to our own lives.

If SECRET SIX has implications in a classroom, it would only be on the college level. I think a case could be made for studying SECRET SIX in the religious or theological class where students can explore how the story is connected to the everyday, flawed human’s search for redemption, absolution, forgiveness (or lack thereof) and how fear and coveting can effect our lives and distort our ethics and morality. It better be a liberal class because it’s likely to make students very uncomfortable, not that that’s a bad thing.


CHRIS’ RECOMMENDATION:
Highly Recommended for mature adults only. I have the rest of the series on order at my comic book store.
Posted by Mr. Wilson at 6:59 AM