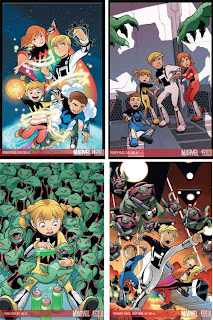 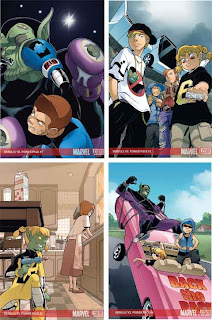 
STORY SYNOPSIS
Franklin Richard is the son of Mr. Fantastic and the Invisible Woman, from the Fantastic Four fame. He is not a superhero like the rest of his family, but he is a genius like his father. When the Four must go into space to fight off a great galactic evil, Franklin must stay with super physicist, Mr. Powers and family. In reverse, the children of the Power family (Alex, 12; Julie, 10; Jack, 8; and Katie, 5) are preteen superheroes, a fact the children feel necessary to hide from the Power parents.

Franklin knows of the Power children’s secret but he does not know how their secret came to be. So, during the sleepover Franklin asks them to share their origin story. What a story it is, complete with Pony-creatures, power-seeking Skrulls, and a prophecy.

The entire story is told over eight issues, split up into two story arcs. The first arc, Day One, tells how the Power Pack first received their abilities. The second arc tells of the impending Skrull deception to frame the Power Pack and gain control of the empire through the use of anti-matter.


REVIEW
The first arc drug along a bit and was a tad soft for my taste, what with all the pony-headed Kymellian and Julie’s rainbow powers. The shape-shifting, lizard-like Skrulls help make up for that. The second arc was more exciting and complex. The Powers had to uncover the secret of who framed them, and then seek to thwart the efforts of the Skrulls by uncovering the secrets to the hidden prophecy, which was full of puzzles and riddles just ripe for the classroom.

Franklin Richards and the Power kids are resourceful and intelligent, courageous and persistent. They are good role models for kids, while still being kids who disobey and get into trouble.

At the end of every issue, Marvel has included a 2- to 4-page mini comic, much like a long comic strip. These are delightful little stories with cartoony caricatures of the Power Pack. Kids will love these; they are quite cute.


ART REVIEW
The cover art of SKULLS VS POWER PACK #2 says enough about Van Lente’s humorous writing and the artist’s ability to make these good kids still relevant to the modern child. Crack me up! I’ve always liked Van Lente comedic bent ever since I read ACTION PHILOSOPHERS.

BE AWARE
Creatures do die, but none of them are human.


IN THE CLASSROOM
First of all, I would take my time with SKRULLS VS. POWER PACK #4. The kids have to solve a series of puzzles and riddles in order to understand the prophecy. This is very similar to the tests Harry Potter et al. had to undergo in THE SORCERER’S STONE. It would be very easy to incorporate the puzzles and riddles into the mathematics and logic curriculum. Solving these puzzles beforehand or during would also help students comprehend the story and give them a reason to read.


OTHER INFORMATION
This story relates to the Skrull invasion occurring across the Marvel Universe titles at the same time.


CHRIS’ RECOMMENDATION:
Recommended
Kids as superheroes? Why not? While you are at it, throw in some logic games (found in the story). What fun!