WHY I KILLED PETER 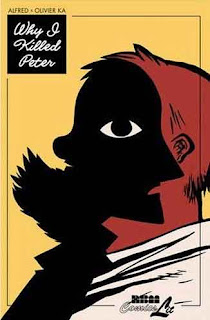 
REVIEW
It is not at all possible to write a charming autobiography about the molestation of a boy by a priest; however, Oliver Ka has somehow managed convey his heart-wrenching deluge of emotional devastation in such a way as to keep from mashing the reader into a messy quivering puddle huddled in the corner. He is all at once, honest yet delicate in his true-life portrayal. WHY I KILLED PETER is the closest thing to charming any molestation story could ever come; his graphic novel is remarkable.

Young Ka lived a life full of juxtaposition. He lived with his hippy French parents and vacationed with his strict Catholic grandparents. He swam naked with adults and was threatened with Hell if he played with his “peepee”. For the most part, he was left to make his own decisions about God and religion, allowing him a pastoral-liberal childhood.

His development was hastened when a trusted friend and priest molested him one night at a summer camp. Like many children, Ka not only kept his secret well into adulthood, but also pretended the incident was unimportant.

Years later, in an attempt at catharsis, Ka wrote this book and had his compatriot illustrate it. The two went back to the priest’s summer camp – who was thought to be dead – and was surprised to find Peter alive and well. Ka then finds himself conflicted again. How does one confront his perpetrator face-to-face?

Ka’s story is, at its core, a story of paradox and hypocrisy, multiple messages and oppositional indoctrinations. He spends much of his life confused about his own understanding of the world, until he puts Peter to rest. 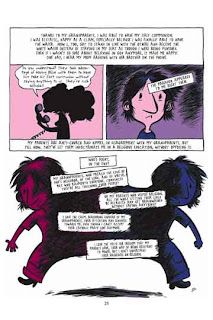 Illustrated example of the push-pull in Ka's life.

ART REVIEW
The first thing most people want to know before reading a book such as this is:


Yes, the scene is in the book, but it is not overly illustrated. The panels are very dark with black and blues and some shapes of heads or hands. No sexual organs or positions are displayed. The writing is more graphic in the sense that Ka describes his realization that he is not massaging Peter’s tummy but his genitals. Any further portrayal of molestation is left to the void. The entire event takes up 11 pages out of the total 112.

Beyond that, the art is what gives much of the book it’s distinctive and charming characteristic I described earlier. The colors and lines are simple and reflect the youthful nature of the boy of the time. It makes the excellent but traumatic story tolerable and less convulsing. Click here for a preview. 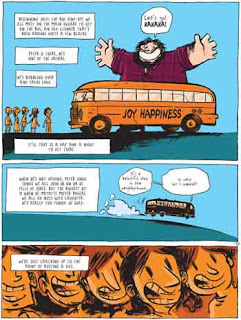 The art is whimsical and comforting despite the subject matter.

I debated even writing a review of this book, as it is not appropriate for children, teens or many young adults. However, I found the story so strong that I felt compelled to discuss it.


BE AWARE
Child molestation is the most serious of subjects and one must be aware to never put this book in the hands of children, teens or most young adults.


IN THE CLASSROOM
Of any classroom, I think WHY I KILLED PETER could only be appropriate in the college classroom, if at all. From a psychological point of view, this title is an excellent book to use when discussing pedophilia and the deep emotional damage of the victim. Ka is concise and candid about his feelings – deconstructing his confusion and the impact of the molestation on his life. His reflective nature gives us keen insight into the mind of the child victim and the adult survivor.

As for literature, the cathartic nature of writing and the fine quality with which Ka constructs his story makes for the perfect advanced learning experience. The aspiring writers can learn how to express their deep feelings and also be reflective and introspective.


CHRIS’ RECOMMENDATION:
Highly Recommended for Mature Adults Only
Yes, Ka’s life was full of dichotomy, which comes through the story and the illustrations. The crafting of his book – the sensitive and charming nature of the art set against the tragic story – gives the reader this strange sense of two worlds colliding together and allows us to experience his free pastoral life while simultaneously feeling his emotional and physical turmoil. It is a discombobulating reading experience, to say the least, but one worth reading.