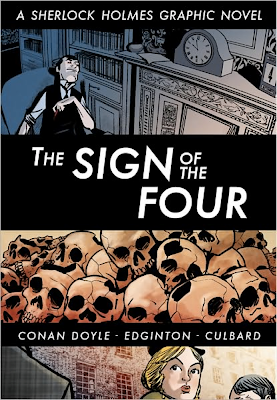 
The SIGN OF FOUR is a graphic adaptation of Sir Arthur Conan Doyle’s classic mystery featuring Sherlock Holmes and his partner, Dr. John H. Watson.  Part of their Crime Classics line of comic literature, British graphic novel and manga publishing company, SelfMadeHero, set out to adapt not only THE SIGN OF FOUR, but THE HOUND OF THE BASKERVILLES, and STUDY IN SCARLETT, and THE VALLEY OF FEAR.  Each novel is a must have for any fan of Holmes’ mysteries.

The novel opens with Holmes injecting himself with a cocaine solution in order to combat his lack of activity in solving crimes and mysteries. We are then introduced to the lovely Mary Morstan, who delivers what plans to be one of Holmes’ and Watson’s most exciting adventures. Ms. Morstan’s father disappeared some ten years ago, and since then, she has been receiving an anonymous gift each year on the anniversary of his disappearance. Morstan finally seeks Holmes’ advice after receiving a letter to meet claiming that she is a “wronged woman who shall have justice.” What follows is the thrilling pursuit of truth concerning the mysterious “sign of four.” Buried treasure. Feuding rivalries.  Murder.  What’s not to love about this story?

I have to admit to being quite a Sherlock Holmes snob. I fell in love with Conan Doyle’s stories of the genius detective in college and have since read and reread them many times. Although the Robert Downey Jr. films are exciting, I was disappointed at how they strayed from the short stories. So, when I picked up THE SIGN OF FOUR by Ian Edington and I.N.J. Culbard, I was skeptical. However, Edington’s adaptation of the original text is beautiful, so much so that I found no need to peruse the original text. Edington sounds like Doyle’s original, and I quickly became lost in the story. 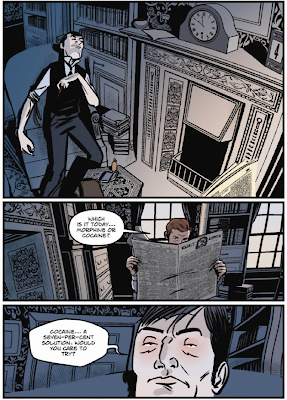 My only criticism is of how he draws Holmes himself. Again, I feel a bit biased toward the Jeremy Brett BBC series of the 1980’s. Brett played Holmes for ten years, and to me, represents the perfect portrait of the cold, deductive detective. In this graphic adaptation, Culbard drew Holmes’ face with such a large chin, that I found myself distracted for the first thirty pages. I admit, however, that this is my own problem.

For students, Edington and Culbard pair text and picture so cleverly, that even during complicated plot points, the reader can still follow the narrative. You can tell that creating this classic adaptation was a very collaborative process between Edington, Culbard, and Doyle’s original text. I am very pleased with how faithful they are to both the story and the character development. 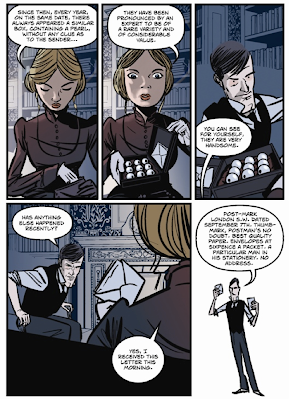 IN THE CLASSROOM
There are many ways to integrate Sherlock Holmes into any literacy lesson. THE SIGN OF FOUR graphic novel is a great introduction to Sherlock Holmes and Dr. Watson. Teachers wanting to complete a genre study on mysteries should definitely include this graphic novel. When teaching mysteries to students, I find it important to break down any mystery into the classic W’s:
·       Who?
·       What?
·       When?
·       Where?
·       Why (motive)?
·       How?
When having students either take notes on these items, or analyzing any mystery, Sherlock Holmes is wonderful at teaching students the power of observation, deduction, and logic. For example, Holmes is a master at scanning the presented information and choosing only the most important details. In "The Adventure of the Reigate Squire," Holmes says himself, “It is of the highest importance in the art of detection to be able to recognize out of a number of facts which are incidental and which vital. Otherwise your energy and attention must be dissipated instead of being concentrated." What a perfect role model for making conclusions solely based on facts, not opinions. Even at the university level, I could see a science or philosophy professor using Sherlock Holmes as an example for analytic reasoning.

No matter the age level of students, Holmes is a great example of the life-long learner whose sole desire is to seek out the truth.  Holmes’ character development throughout many mysteries is also noteworthy as a possible character study.

MY RECOMMENDATION
Due to Sherlock’s blatant drug use in the first pages (despite Watson’s medical pleadings to stop), I recommend THE SIGN OF FOUR for middle and high school classrooms.  At the teacher’s discretion, I could see parts of this story used in lower grades, but there tends to be quite a bit of murder in Holmes’ mysteries.

Nonetheless, if an elementary school teacher is looking to introduce either Sherlock Holmes, or the mystery genre, I recommend many of Doyle’s shorter stories: THE RED-HEADED LEAGUE, THE ADVENTURE OF THE BLUE CARBUNCLE
Posted by Mr. Wilson at 7:50 AM