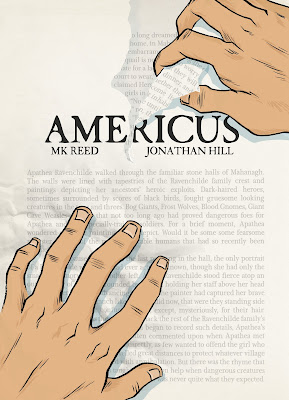 STORY REVIEW
Neil Barton is your typical thirteen-year-old: he’s unsure of himself, awkward, shy, and spends most of his time alone with his nose in a book.  AMERICUS, written by MK Reed and illustrated by Jonathan Hill, is a coming of age story set in a small town in Anytown, USA.  Neil, our main character, uses the local library in his small home town of Americus as a safe-haven to the discomfort of junior high school.  There, he and the young librarian introduce us to the fantasy world of Chronicles of Apathea Ravenchilde, the Huntress Witch, a Dungeons and Dragons inspired young-adult novel series.  However, it isn’t too long before the conservative Christian citizens in town begin publically ousting the Apathea series as “unfit for the souls of our youth.”  Neil must battle the town’s conservatives to prevent the Apathea series from becoming banned in the library; meanwhile, Apathea must battle her half-dragon brother in order to save her kingdom.

MK Reed does an impressive job blending these two stories as each protagonist battles his/her own conflict.  Themes of censorship and adolescent rebellion are prominent throughout AMERICUS, and can be great launching grounds for classroom discussion.  Reed’s characters and setting are believable.  Readers can assimilate into the anonymity of Americus and its town’s residents, while simultaneously feeling sympathy for Neil’s teenage angst.

ART REVIEW
Although Reed writes believable dialogue, Jonathan Hill’s illustration style creates actual human beings with actual problems and true emotions.  He doesn’t draw a lot of details, yet his use of black and white makes the book realistic in its depiction of Middle America happenings. 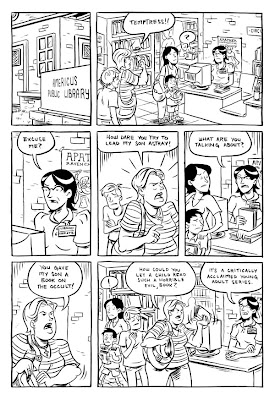 As the AMERICUS flashes into the story of Apethea, Hill begins to use more generous strokes of ink wash.  He illustrates more shadows and varying shades of gray, giving the fantasy world a very appropriate Lord of the Rings look. 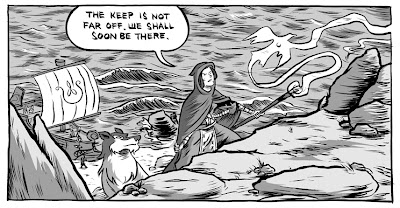 What is most intriguing is how Hill blends the fantasy and reality using his pen.  Readers have no difficulty in discerning which story one is reading, but the combination of these two different worlds is never drastic and shocking.  It is as though both sets of characters co-exist simultaneously to give refuge for uncomfortable teens looking to escape to a different world. 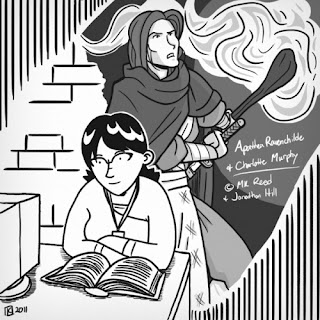 IN THE CLASSROOM
It would be very easy to steer clear of AMERICUS, due to the controversial themes presented.  Especially in elementary school, teachers don’t usually jump into discussions on censorship at the hands of conservative Christians.  There is talk of the sin of homosexuality; in fact, Neil’s best friend, Danny, gets shipped off to military school because of his love of the Apathea series and the fact that he is gay.  His parents don’t seem to place either on a spectrum, but instead claim that one is the cause of the other.  Nonetheless, I think AMERICUS is a great tool for teaching the more sophisticated technique of writing a frame story.

Frame stories, or a story within a story, are an effective way of comparing and contrasting different characters, settings, and themes.  Successful writers have often used this technique to show the reader how people are not only influenced by their interactions with other characters, but storytelling (think Hamlet’s play within a play, i.e.: The Mousetrap).  Since AMERICUS does such a fantastic job visually representing a frame story, it makes sense to use this graphic novel to teach students how they can incorporate one in their own fiction.

Before reading AMERICUS, either as a read aloud or graphic novel study, I would introduce the idea of frame stories. It is important to emphasize the visual aspect of frame stories (how characters are “watching” another story) by using film examples.  As you progress through AMERICUS, use questions to deepen students understanding:


It is oftentimes appropriate to dissect the two plot-lines so that students can see them running parallel to one another.  You can use a Flow Chart to map out the key plot points of each narrative, while noting when and why they intersect.

As Neil fights to save his beloved Apathea series from being banned, Apathea fights her own battles.  Both characters grow from the process and emerge stronger. Students should start thinking about other narratives that either offer similar thematic elements, such as conflicts, or similar characters to their own narrative piece.  Incorporating one story into another takes time and trial and error, but I feel that AMERICUS is a good model for doing this well.

MY RECOMMENDATION
I highly recommend AMERICUS for Writing and Literature classrooms grades 6 and up, especially for high school. I recommend with reservations using AMERICUS in the elementary grades due to the references to religion and homosexuality.  You could use the frame story technique in fifth grade, but only toward the end of the school year when students are more proficient writers. AMERICUS’ readability is targeted for ages 12+, and MK Reed writes with this demographic in mind.  Middle school students can easily relate to Neil, his adolescent woes, and his need to escape into the realm of fantasy literature.

"The Graphic Classroom" has been included in the A Sunday Drive for this week. I hope this helps to attract even more new visitors to here.