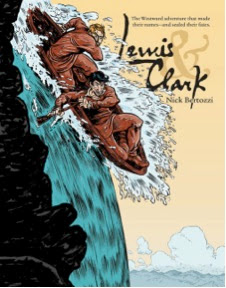 STORY REVIEW
Can you really teach any topic or subject using graphic novels?  Absolutely!  LEWIS & CLARK is a perfect example of a high-quality graphic novel that is a wonderful accompaniment to any classroom unit on exploration and the West. Using a thorough bibliography of scholarly recountings of Lewis and Clark’s journey to find a water route to the Pacific Ocean, Nick Bertozzi successfully weaves history and story to create a captivating historical narrative.

In 1804, Meriwether Lewis and William Clark embarked on one of the most famous journeys in American history. LEWIS & CLARK is historical graphic novel that tells their amazing adventure from St. Louis through the Louisiana and Oregon Territories, finally ending two years later at the Pacific Ocean.

ART REVIEW
Nick Bertozzi’s style is vastly different from other mainstream graphic novels published by First Second. When reading, you can’t help but feel as though you are reading a modernized Tintin adventure by Hergé. It is not surprising then that Bertozzi admits to both Hergé and Jack Kirby as childhood inspiration for his self-taught artistic talents.

LEWIS & CLARK is such a uniquely illustrated graphic novel. Completely in black and white, Bertozzi uses clever page layouts and light versus dark to show movement over time. 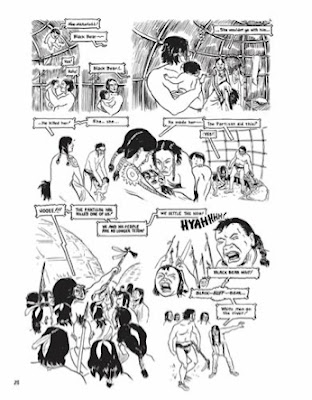 The sheer size of his book, 8.5 by 11 inches, allows Bertozzi to play around with splash pages and two-page layouts. Oftentimes, he has pages with no panel borders, which gives the reader a real sense of the chaos and danger of this expedition. 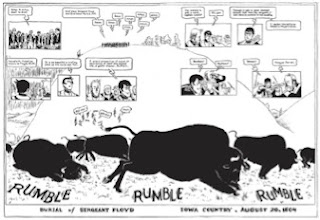 IN THE CLASSROOM
I would definitely include LEWIS & CLARK in my stack of textbooks to teach the American West.  Since this story is historical fiction, I would make sure my students have background knowledge of Meriwether Lewis and William Clark before using Bertozzi’s graphic novel. Although there is one very subtle reference to having sex with a Native American, there is no reason why any fifth through eighth grade teacher cannot use this graphic novel in their classroom.

Teachers can use LEWIS & CLARK to teach a variety of reading strategies, but I feel the best use of this book comes from the story and its characters. Bertozzi chooses to focus his narrative on Meriwether Lewis. He is a patriotic visionary, who is unforgiving and demanding throughout his journey. He eventually goes insane and commits suicide at the end of the novel. Although many students might find these character traits to be negative (and quite disturbing), it is exactly these features that propel Lewis and Clark toward the Pacific Ocean despite innumerable difficulties.  Lewis offers teacher and students a great example in character study and the fall of a hero.

LEWIS & CLARK touches on issues of slavery and diplomacy as the American “Corp of Discovery” travel westward. In specifically discussing Native Americans, Bertozzi does a wonderful job giving each tribe and each character a purposeful history. For example, Sacagawea is depicted as cunning and intelligent despite her forced escort to Lewis and Clark. So many times, textbooks depict all Native Americans and merely savages.  Bertozzi writes the Native Americans as intelligently dealing with the French, British, and Americans differently based on what they have learned in the past. Bertozzi even writes the dialogue with unusual detail giving the reader what the Native American hears based on the language differences.  All of these things can be discussion and mini-projects in a history classroom.

MY RECOMMENDATION
I highly recommend LEWIS & CLARK for any history classroom grades 5 and up.  There is one subtle reference to having sex with a Native American, and Lewis does commit suicide at the end of the book. The sexual reference is so subtle, however, that I feel most students would miss it altogether.  The suicide is also subtle, but cleverly illustrated for effect.
Posted by Mr. Wilson at 9:37 AM