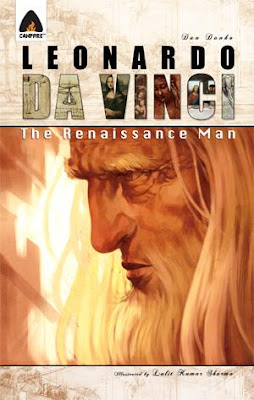 “There may not be in the world an example of another genius so universal, so full of yearning for the infinite, so far ahead of his own century and the following centuries than Leonardo da Vinci.” – Hippolyte Taine, art critic and historian

STORY SUMMARY
The mystery of the stolen masterpiece, The Mona Lisa, underpins a wonderfully conceived graphic story of the life of the most famous Renaissance man whose art inventive mind continues to echo to this day. LEONARDO DA VINCI: THE RENAISSANCE MAN by Dan Danko is powerfully written, examining the ins and outs of the da Vinci as he moves from benefactor to benefactor, shifting his focus from designing new ways to engage in war to creating some of the powerful paintings to stand the test of time. Political intrigue and the plight of an artist, even a great one like da Vinci, is on full display here in the story that moves from the stolen painting (and its recovery) to the complicated life of da Vinci.

ART REVIEW
The illustrations by artist Lalit Rumar Sharma are beautifully done, particularly the oversized panels that show us glimpses of the da Vinci’s work and, even more, the blueprints and detailed sketches that depict such an active imagination and insightful eye.

IN THE CLASSROOM
The story of da Vinci is worth telling in just about any grade, particularly when we consider his influences on science, art and design. The vocabulary and the complexity of the storytelling here make LEONARDO DA VINCI: THE RENAISSANCE MAN a good addition to a high school library, particularly the art room shelves. However, science teachers could also easily pull bits from this story to showcase how an artist also influenced the way we see the human body and how his engineering principles continue to influence aviation and more.

MY RECOMMENDATION
I highly recommend this book, although it is more attuned for the high school or university classroom. There is nothing profane in here, but the dense text and rich vocabulary, and complex storyline of da Vinci’s life (which does not seem dumbed down here) might make it a difficult read for some middle school students and most elementary students.
Posted by Mr. Wilson at 7:26 AM