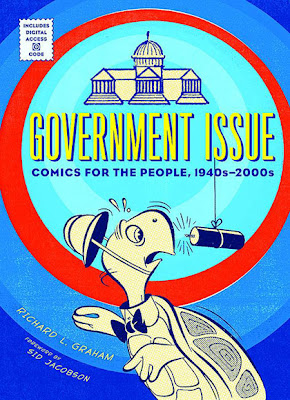 STORY SUMMARY
In this extensive and intriguing collection of comics through the years, you suddenly realize how often comics were used to educate and influence the American public through rhetoric and persuasive writing by our government. In a 1942 pamphlet called “Pocket Guide to China” by the US military for soldiers stationed in Asia, the headline of “How to Spot a Jap” really jumps out at you. Or, it should. And that’s when you begin to realize the extent of comics being used to influence the minds of many.

In GOVERNMENT ISSUE, Richard Graham (with a foreword by Sid Jacobson) provides a first-hand look at comics through the years and also, luckily, he frames each section with a well-conceived analysis of the use of comics, both pros and cons. This collection is really a gold mine of documents from various sectors of our government, and while some of it is amusing, some of it is very serious. Comics were understood early on a way to reach the “common folk,” and no doubt, they have been effective. This collection pulls back the veil a bit and gives us a way to examine the way the views of a nation can be shaped, and manipulated.

ART REVIEW
Obviously, given the many comics and artists represented here, there is no one set style in this collection. But just having the comics in one place (although you can access them online, too) makes for a valuable resource for any collector of comics or historians digging into the ways that media is used to shape public opinion. It’s intriguing to note how artist such as Walt Disney and Will Eisner were often part of the efforts, and how famous characters from the main comic houses were put to use in informational pamphlets.

Access to some of the comics in the collection can be found online.

IN THE CLASSROOM
The Common Core Curriculum, now being adopted by many states to align teaching standards, has a strong emphasis on rhetorical stance of language, argumentative and persuasive writing, the use of various media to represent information and the use of original sources. This is a book that does just about all that, and GOVERNMENT ISSUE would be of great value to any high school classroom that is doing research around historical themes, from our involvement in wars to the effects of drugs to how to prevent forest fires. This book is a treasure trove on many fronts when it comes to research on US policies and actions.

MY RECOMMENDATION
I would highly recommend GOVERNMENT ISSUE for any high school classroom, and maybe some middle school classrooms. There are a few comics (the “How to Spot a Jap” being the most prevalent) that would require direct instruction by teachers for middle school students. I am sure elementary students would enjoy GOVERNMENT ISSUE for the comic element, but the underlying themes might be a bit too much.
Posted by Mr. Wilson at 7:31 AM