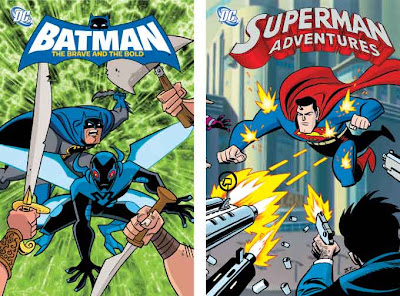 Some super comics titles are coming to libraries with a reinforced library binding or paper-over-board editions. Thanks to a licensing agreement between Capstone Press (an educational publisher) and DC Comics, the DC Comics comic book list is coming to libraries in a format that will withstand the student readership.

Capstone will launch the books this fall, releasing 24 titles. 24 titles! Every single one of the titles comes from DC's all ages line, which means they are appropriate for the elementary classroom. Following are the comics on deck for first release:

Capstone is already planning new books for next fall. This will include more original BATMAN and SUPERMAN stories including two new chapter book series: DARK KNIGHT and MAN OF STEEL.
Posted by Mr. Wilson at 10:09 AM