I SEE THE PROMISED LAND 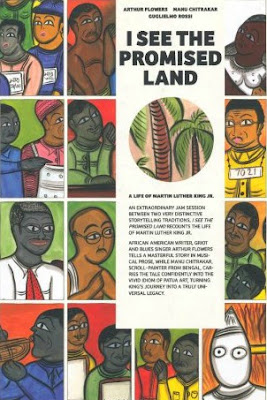 By Kevin Hodgson
Staff Writer
STORY SUMMARY
I SEE THE PROMISED LAND is a creative graphic novel mash-up that is put together like a comic, picture book, poetry and rap in a way that tells the life story of Martin Luther King Jr. from interesting angles. Creators Arthur Flowers (a blues musician and teacher), Manu Chitrakar (An Indian artist) and Guglielmo Rossi (a graphic designer) pull it off by fusing the well-know biography of King with the storytelling style of Africa and India, with hints of Hoodoo, too, as the Patua (Bengali) scroll-painting artwork transports the reader into an story circle of sorts of muses.
As the main story unfolds, the writers use a Griot chorus effect, as if a circle of listeners are adding their own rhythmic, rap-infused voice to the story of King, from his time growing up to his time leading a movement. Interspersed within the text are quotes and sections of speeches from King himself. This multitude of voices sometimes borders on cacophony, but mostly, it gives the text an aural characteristic for the reader. Even the text plays a part in the story. Where we learn King was shot, the page is completely black, except for four barren white text boxes. It’s a stark reminder of what was lost that day.
ART REVIEW
Many Chitrakar’s use of scroll painting for the art of this book is so different than we are used to, and so expressive in the colors and design, that the art truly does become a partner to the words in this book. A note in the book explains “the sequence of images in a Patua scroll – the matter in which images are read one after another – was more than halfway towards the structure of a modern graphic narrative.” There is a chalk-style effect to the images and they seem to be to be more at home in a picture book, perhaps, than a graphic novel. But that is the beauty of this book. It cannot be pigeonholed.
IN THE CLASSROOM
Given the wealth of resources about the life and times and words of Martin Luther King Jr., it would be hard to argue this is the definitive book for the classroom. But I SEE THE PROMISED LAND is unlike most of the other books and for students who are interested not only in King and his legacy, but also about the emergence of storytelling devices, this book may fit nicely in a larger collection. There is a helpful glossary of editorial notes at the end of the book, which goes into more details about such references as Reconstruction, the Black Power movement, and Operation Breadbasket.
MORE INFORMATION
Format: Hardcover
Pages: 142
Publisher: Tara Books
ISBN-13: 978-9380340043
MY RECOMMENDATION
I want to highly recommend this book, with some reservations. There are some images of hangings of blacks in the South and the emergence of the Ku Klux Klan as part of the experiences that formed King’s vision and the small references to Hoodoo religion, particularly at the start of the story, may be unsettling to students and staff who are wary of religion. I’d suggest this book be aimed at high school students more than middle school students, and that it not have a place in most elementary classrooms, given the content.
Posted by admin at 3:12 PM