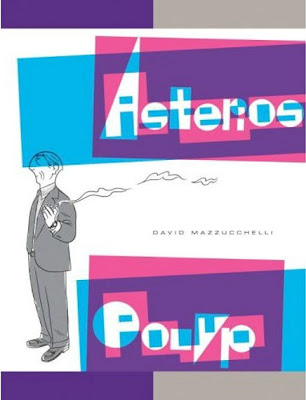 STORY REVIEW
David Mazzucchelli’s first solo foray into graphic novels exquisitely blends a strong aesthetic voice and a complex, engaging story on the posturings of academia, the difficulties of intimacy, and the philosophy of design.

And to put it simply, one of the most visually provoking novels I’ve ever read.
Mazzucchelli’s main characters – protagonist Asterios Polyp (whose unusual last name was bequeathed to his father by a frustrated clerk at Ellis Island), his delicate wife Hana Sonnenscheie, and the ghost voice of his deceased twin brother Ignazio – interact in a kind of non-linear dream world which is both abstract and concrete.

Asterios, an architect and professor whose draftsmanship and design ideas are renowned, never builds any of his blueprints; he drifts along in a kind of cerebral prison, trapped in a golden cage of self-infatuation.

Hana, the young and sensitive sculptor, falls for Asterios despite his nearly unbearable ego and little patience for Hanna’s quiet artistic genius. A love story for modern times. 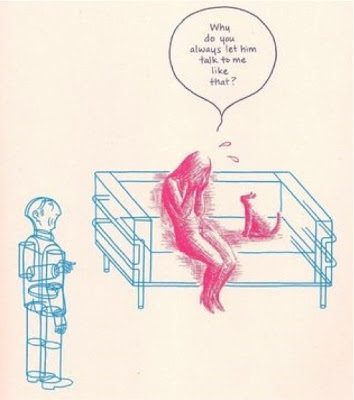 The panel above illustrates the dissolution of Hana and Asterios’s relationship, and exemplifies how well Mazzucchelli unifies form and content: the dementedly-logical Asterios, depicted as a transparent combination of geometrical parts, exists in a world apart from Hanna’s penciled, pinkish, softly cross-hatched body.

Mazzucchelli’s aesthetic choices, from his palettes of warms and cools to panel placement and gutter width, invite rhetorical scrutiny. Most of the visual metaphors should not escape even the casual reader, though Mazzucchelli plays with a wide catalog of allusions.

IN THE CLASSROOM
ASTERIOS POLYP’s complex themes, allusions, and design concepts warrant placement in an advanced secondary or university classroom with some time to devote to both aesthetic and literary theory. However, for an ambitious high school teacher whose students exhibit familiarity with the basic vocabulary of comics, ASTERIOS POLYP may serve as a provocative medium in which to study visual rhetoric, art/color theory, as well as literary tropes like the tragic hero. A close look at Asterios’s flaccid bourgeois heroism, his inability to recognize his own flaws, and his decidedly detached approach to relationships may cultivate sophisticated discussion on gender and class. The book also acts as an introductory reader on the philosophy of design, which may take initiated students time to digest.

MY RECOMMENDATION
I highly recommend ASTERIOS POLYP for advanced high school and university classes whose curriculum centers on literature, art, design/architecture, and philosophy. The book contains some images appropriate only for mature readers, including nudity and bedroom scenes – however, they do not approach the realm of the vulgar.