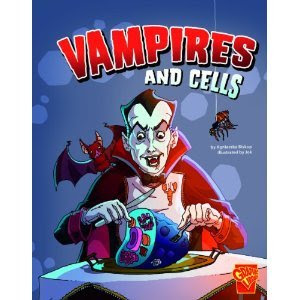 STORY SUMMARY
I admit that the title of this one threw me. Vampires and cells? What the heck! But as I dove into this graphic book in Capstone Press’ Monster Science series, I realized that VAMPIRES AND CELLS and the other titles in the series might be yet another way to bring a fun approach to learning science in the classroom setting. This non-fictional graphic text nicely juxtaposes Dracula and other vampire creatures in the background of panels as a humorous counterpoint to a fairly complex introduction to cells and cell structure in the narration. The text here does not skimp on scientific vocabulary, and I found myself wanting to make sure I pass this book along to my science teacher colleague for her unit on cells later in the year.

ART REVIEW
Much of the art here is rudimentary and basic. But, towards the end of the book, there are a few two-sided pages that feature a full inside look at an animal cell and a plant cell (and a few vampires) is nicely done, very entertaining and educational. It makes me hope that a teacher using VAMPIRES AND CELLS might have an document camera to share the graphic with their students on a large screen. They are beautifully done.

IN THE CLASSROOM
The books in this Monster Science series would be right at home in the upper elementary or even middle school classroom. VAMPIRES AND CELLS and the rest are fun ways to introduce or reinforce complicated scientific principles and concepts. You could argue that Dracula has no right being in the same text as endoplasmic reticulum, but … you’d be wrong.

MY RECOMMENDATION
I highly recommend this book for upper elementary and middle school classrooms, although the upper end of middle school might be pushing it for reading levels. The book is fun and educational. If you have students whose religion frowns on the mystical or magical, this might be one to avoid (I say this from experience). But there is nothing inappropriate here, other than a few calls for red blood cells by the vampires.
Posted by Mr. Wilson at 12:37 PM