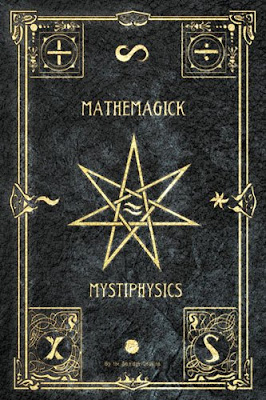 By Kevin Hodgson
Staff Writer
STORY REVIEW
It’s an odd book that makes heroes of historical figures of deep thought such as Georg Cantor, Alan Turing and Maria Agnesi. But that’s the beauty of graphic novels, isn’t it? The canvas is wide open for creating worlds within worlds, bound only by imagination. MATHEMAGICK & MYSTIPHYSICS by James Davidge takes the reader on a journey into the realm of mathematics and philosophy as a sort of epic journey through all sorts of time and dimensions as a group known as The Wandering Stars (as the collection of heroes here is known) seek knowledge through theories and explain the world through thought experiments.
This volume (called “The Possibilities of Pandemonium”) begins with the theft of an abstract piece of art but soon evolves over a series of collected stories to adventures in places like The Philosopher’s Woods and alternative universes where ideas are the powerful currency. There were a few times that I lost track of the narrative, to be honest, but Davidge’s writing always seemed to bring me back and I found myself hooked back in again. There’s a certain unhinged quality that comes across with the characters, as if the world were held together by lunacy, and yet, their explanations for their magic are rooted in logic. It’s a strange balance that Davidge is creating. At some point, I lost interest with the plot device of the stolen artwork and instead, I found myself wondering about these historical figures and their impact on the world.
A graphic novel like this makes you want to fire up your search engine and learn a bit more about Al-Khwarizmi (from ancient Bahgdad) and Hypatia (from ancient Greece) and the rest of the members of The Wandering Stars.
ART REVIEW
MATHEMAGICK & MYSTIPHYSICS is a black and white graphic novel but artist/illustrator Jesse Davidos packs a lot of punch into the many frames of this book. The use of imagery and images really compliments the very complex theories that are at the heart of the stories. Davidos and Davidge take advantage of the graphic medium here. I particularly like the section of “flatland” where the world becomes flat geometric shapes, as Davidos’ rendering of the world takes on a life of its own. (And the nod to Lewis Carroll and Alice in Wonderland is a nice touch).
IN THE CLASSROOM
This book could be an ideal graphic novel to hand off to that gifted and talented student in the advanced math class. The theories behind these characters are quite complex, even with Davidge’s inventiveness, but it could be a valuable resource for students who need a bit more challenge. For most students, however, I think even the use of a graphic novel format might be a bit intimidating.
MORE INFORMATION
Format: Paperback
Pages: 102
Publisher: Bayeux Arts
ISBN-13: 978-1897411193
Also, the website for the book has an interesting video to accompany the book.
MY RECOMMENDATION
I would recommend this book for an upper level high school class, but I think its audience may be limited by the complexity of the material that forms the core of the book. Many students might get lost easily in the ideas that surface here, but as I mentioned above, MATHEMAGICK & MYSTIPHYSICS might be a good tome to pass long to those higher-level students.
Posted by Mr. Wilson at 1:08 PM