LEGO STAR WARS: SAVE THE GALAXY 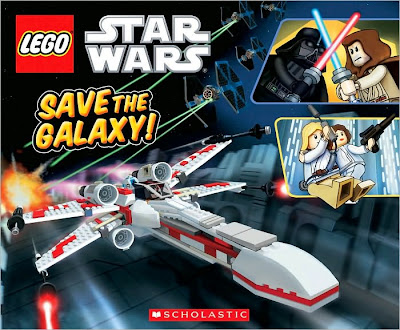 By Chris Wilson
Editor-in-Geek
REVIEW
If it weren’t for R2D2 and C3PO the galaxy would be topsy-turvy. The little beep-beep-booper and language interpreter –– small though they may be –– played their part in destroying the Death Star and now the youngest of readers can behold the magic of Star Wars as a board book and comic. I stumbled upon this gem at our school’s Scholastic book fair. Actually, a teacher bought it for her classroom and showed it to me. It was the only copy in the fair, but I finally got my hands on my own copy.
I put this board book comic on my rack and it stayed checked out for the rest of the year. First and second graders came by the dozens to get their hands on my Star Wars comic. Funny thing: my Star Wars books are almost always in high demand. Kids can’t seem to get enough of the greatest science fiction franchise of all time.
There are some big words in here and some lengthy narration boxes. LEGO STAR WARS: SAVE THE GALAXY is not easy-peasy lemon-squeezy, but you will find what I found. The reading level may be higher than K-1 kids are ready for, but that doesn’t matter. They will attempt it anyway, even if they only read the pictures. The smart teacher will be there to scaffold students and use their motivation toward Star Wars to lure those reluctant boy readers into the fold of literature. That’s what it is all about. If they want to read, they will read. Young elementary students will want to read LEGO STAR WARS. Trust me.
AGE RECOMMENDATION
Chris’ Rating: Emergent reader and older
Publisher’s Rating: Ages 4-8
IN THE CLASSROOM
This year a few young boys in first grade were sent to me simply because they had already developed a strong dislike for reading. Both of them could read fine, but they disliked it. That’s when it begins my friends. First grade we start seeing kids develop an aversion to reading.
I loaned this comic to both boys, one after the other, before offering it to anyone else. They loved it. Soon, I found kids were coming to my room asking for “that Lego Star Wars” book. It spread and so did the requests to check out my comics from other kids. Star Wars had that strong an impact.
Combined with strong relationships, comics can take hold of the most reluctant or struggling reader and turn them into lovers of books. It’s hard. It takes time, effort, commitment and teamwork on the part of the teacher, parent, reading instructors, administration and librarian. The work is worth it.
OTHER INFORMATION
Author: Not available
Illustrator: Not available
Publisher: Scholastic
Genre: Science fiction
Format: Hardcover
Pages: 14
Color: Full color
ISBN-13: 978-0-545-30101-5
CHRIS’ RECOMMENDATION:
Highly Recommended
Posted by Mr. Wilson at 1:29 PM