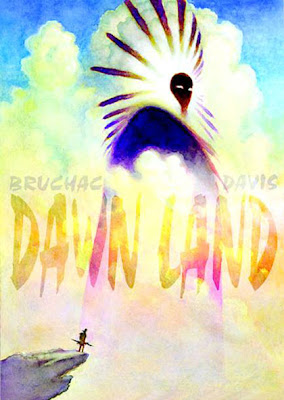 By Kevin Hodgson
Staff Writer
STORY REVIEW
DAWN LAND is a story on a grand scale that intertwines the mythology of the Abenaki Nation of Native Americans who inhabited what we now call New England (where I live). Originally in novel form by Joseph Bruchac, this graphic adaptation by Will Davis is a magical book that is beautiful to read on so many levels that I can’t wait to put the book into someone else’s hands to read. But the heart of the enjoyment is the story itself, as an emerging hero known as Young Hunter must set off across the land with his three wolf/dog companions to confront and defeat the terrible Stone Giants who are slowly destroying all the tribes. By completing his mission, Young Hunter is also ushering in an entirely new era of life for his people. The book is an insightful look at New England 10,000 years in the past and the vision is frightful, raw and energizing.
ART REVIEW
I can’t say enough about the brushwork of Will Davis in DAWN LAND. The art is so stunning that it has to be seen. Drawn in black and white, the book brings to life an almost dream-world existence to the reader, with the spirits of Ancestors fading in the backgrounds and the Gods looming in the skies. The landscape drawings are stunning as well. (A quick aside: my sons often reach for graphic novels as they arrive for review, and I tried to hand this one to my sons. Both of them flipped through the pages, and then declined. I asked, why not? Their answer: they don’t like black and white graphic novels, which took me aback. They don’t know what they are missing with this book.)
IN THE CLASSROOM
DAWN LAND would make a great addition to any class studying the Native Americans of our country, although there is some brief nudity, kidnapping that has violent and sexual overtones, and some limited profanity. The story is also told as a heroic journey. Young Hunter must journey alone, with animal companions, to confront evil, and if you are reading The Odyssey, this book might make for an interesting compare/contrast assignment. In the back of the graphic novel, both writer Joseph Bruchac and artist Will Davis write at length about the collaborative project and the mythology and history of the Abenaki Nation that inspired the story. This material is very informative and interesting, particularly as Burchac talks about his own ancestral roots in the Abenaki Nation.
MORE INFORMATION
Format: Paperback
Pages: 320
Publisher: First Second
ISBN-13: 978-1596431430
MY RECOMMENDATION
I highly recommend this book. It has emerged as one of my top reads this year. But, there are some reservations around some issues of nudity (some women’s breasts are exposed), profanity (a little swearing in some dialogue), and two kidnapping scenes that hint at the possibility of rape. This makes the book appropriate for high school and perhaps some middle school classrooms, but not necessarily for elementary classrooms.
Posted by Mr. Wilson at 12:55 PM