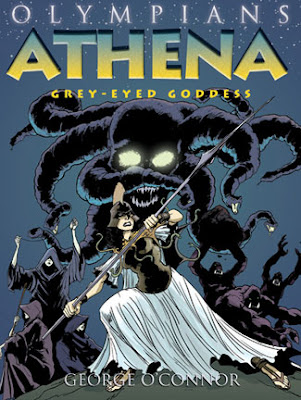 By Kevin Hodgson
Staff Writer
STORY REVIEW
Finally, Athena gets her due. ATHENA: GREY-EYED GODDESS nicely tells the tale of this unusual female goddess of Greek mythology whose presence is all too often seen as a shadow of her brother, Ares. In ATHENA: GREY-EYED GODDESS, George O’Connor nicely weaves in the origin of Athena and some of the exploits that make her such an interesting character.
The birth of Athena to Zeus is one of the stronger myth stories, as she is birthed directly from her father’s head. The back story has to do with a prophesy that led Zeus to swallow whole his first wife, Metis, who then gave birth to their daughter inside of Zeus. Athena emerged from Zeus, full of wisdom and courage and ready for battle.
In this book, we also learn of how she came to take on the name of “Pallas,” how she defeated the giants of Gaia, how she helped Percy in his quest against Medusa, and more. (One confusing bit is that she takes the name Pallas from a friend whom she has killed in competitive games, only to face a giant named Pallas. Why the two have the same name is never quite clear.) Athena emerges as a full character as O’Connor infuses her with the compassion, intelligence and bravery one expects from a goddess.
ART REVIEW
The illustrations here are nicely done, with dark colors visually representing the evils, which Athena must face in the world. The colors are vibrant throughout the book. Athena herself is beautiful, but not sexualized, and her persona is representative of the many facets of her personality.
IN THE CLASSROOM
This book would be a great addition to a library dedicated to Greek mythology, and it a nice counter-balance to the male-dominated work that often goes along with studying myths. The story of Athena’s birth will certainly raise some questions, as will the use of The Fates to tell Athena’s tale here. There is also a wonderful section at the back of the book with useful information about Greek myths, profiles of select characters, a detailed reference to mythology in the story and even discussion questions.
MORE INFORMATION
Reading Level: Young Adult
Format: Paperback
Pages: 80
Publisher: First Second
ISBN-13: 978-1596434325
MY RECOMMENDATION
I highly recommend this book for any classroom library, and think it is certainly most appropriate for middle and high school students. While there are some elements of violence in the battles that the gods undertake, the book may be also be suitable for upper elementary students.
Posted by Mr. Wilson at 9:40 PM