THE ADVENTURES OF UNEMPLOYED MAN 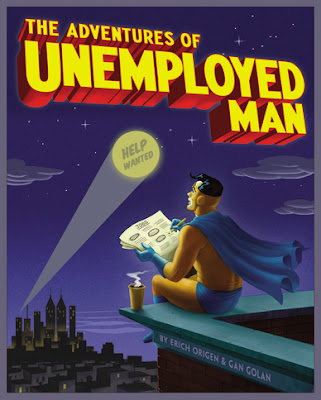 By Kevin Hodgson
Staff Writer
STORY REVIEW
Suffice it to say that satire is alive and well in THE ADVENTURES OF UNEMPLOYED MAN. Erich Origen and Gan Golen have a political stance and they run with it from the very first page. The story is about a superhero, Ultimatum (power: motivational speech), who is transformed into Unemployed Man when he loses his job and discovers the masses of people out of work. Unemployed Man then helps lead the people into revolution, overthrowing the capitalistic superheroes of wealth (led by The Invisible Hand).
The book echoes all of the classic comic books of the past, but the message is underpinned with biting humor and a fearless look at the current state of economics, including elements that led to the recent financial meltdown. I found myself laughing at loud at the ways in which the writers used comic tropes to make political points, never pulling any punches. This is clearly a jab straight at the political right from the political left, and the book makes its points loudly and pointedly and with no apologies. It is a story sure to rile the conservatives.
ART REVIEW
THE ADVENTURES OF UNEMPLOYED MAN is drawn and colored in the manner of classic superhero comics. In fact, if one was to just look at the art (and not read the words), you might think this was a typical comic. There is the same style of inking, and the same facial expression as we used to find on the old Superman and Batman and more. Of course, here, the words are everything. I particularly liked the fake advertisements in this book, as much as the story itself, as the ads played up the theme of political and economic unrest. It’s hard to resist something like the “Political Science Kit” that allows kids to discover the properties of Reagonite, Clintonite, Dubyanite and Obamamite. Or how can you not smile at the ad for the self-pulling bootstraps, which promise you “…a better quality of life than your parents.”
IN THE CLASSROOM
I’m not sure exactly where this book would fit. It is clearly designed for an older audience with knowledge of economics and politics. Understanding satire is an advanced skill (you should have seen the confusion on my young sons’ faces as they read this book). While not inappropriate in content, the story and theme leans so far left of center that to treat it as anything other than a political document would be an injustice of sorts. Not every realm of the world requires such balance, but I believe a classroom does.  I imagine that an upper level high school political science class might be a good place for this book as well as a class exploring rhetoric or author's point of view. Mostly, it seems to me that this is a college-level example of satire and popular culture.
MORE INFORMATION
Format: Paperback
Pages: 80
Publisher: Little, Brown and Company
ISBN-13: 978-0316098823
Click here for the Unemployed Man website.
MY RECOMMENDATION
I would highly recommend this book, with the caveat of finding the right audience. THE ADVENTURES OF UNEMPLOYED MAN does not belong in the elementary or middle school classroom, but it might have a place in some high school and university classrooms. There is no real violence or inappropriate language here. It just that the content is very sophisticated. When I thought about whom I would share THE ADVENTURES OF UNEMPLOYED MAN with, my thoughts ran to adult friends who are college professors and other political junkies in my circle of acquaintances. I couldn’t think of a single kid I’d pass this book along to.
Posted by Mr. Wilson at 9:44 PM