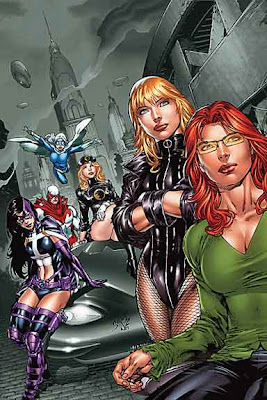 By Chris Wilson
Editor-in-Geek
STORY SUMMARY
In a new series, the Birds –– Oracle a.k.a Barbara Gordon (formerly Batgirl), Black Canary a.k.a. Dinah Lance, Huntress a.k.a. Helena Bertinelli, Lady Blackhawk a.k.a. Zinda Blake joined later by Dove a.k.a. Dawn Granger, and male member Hawk a.k.a. Hank Hall –– are brought back together to confront a mysterious foe who is dead-set on doing serious damage. The hardcover edition of these six issues is due May 2011, so this is an excellent jumping on point for readers new to BIRDS OF PREY.
STORY REVIEW
It is Gail Simone’s narrative style that keeps me reading her books (WONDER WOMAN and SECRET SIX). Nowhere is her first person narrative stronger than in BIRDS. The yarn relies on two things: heavy doses of character reflection, and multiple stories occurring at the same time. The beauty of BIRDS lies in the literary devices intermingled with the coloring.
As the pages turn and the narrators change so does the coloring of their narration boxes, which accentuates the delicate intricacies of how Simone crochets the multiple stories together to create a rich and complex tale that defies the simple superhero stereotype.
No stereotypes, no caricatures, no silliness, no ridiculous story arcs. Simone takes her supers seriously and gives readers breadth and depth of story to deconstruct and discuss. I simply cannot abide the completion of her detailed afghan. I don’t want the BIRDS to change.
ART REVIEW
From the pencils and inks, to the colors, to the panel layout –– the art is dark, detailed, and seamlessly brings Simone’s words straight to the mind. The Birds are spandex-clad and some are well proportioned but not distractingly sexual. They are true to themselves and I appreciate their femaleness. They are not stiletto-healed, big-boobed bimbos. They are women: strong, clever and human.
AGE RECOMMENDATION
Chris’ Rating: Ages 15 and older
For the sake of school purposes, I would generally stick to high school aged students. With that said, I would encourage my daughter to read BIRDS when she is … say … 13-years-old.
BE AWARE
Cursing and blood and fighting and all that good stuff abound.
IN THE CLASSROOM
As I have stated with her other titles, it is Simone’s ability to write female characters beyond stereotypes or sidekicks that makes her so inviting. It is her narrative style that keeps readers talking and reading and recommending. From a composition perspective, her use of first person narrative and crocheting of simultaneous multiple storylines would be ideal as a model for students. BIRDS OF PREY could be used extensively in a contemporary feminist-study class.
OTHER INFORMATION
Author: Gail Simone
Illustrator: Various
Publisher: DC Comics
Genre: Superhero
Format: Monthly comics (hardcover available)
Issues: 1, 2, 3, 4, 5 and 6
Pages: 32 each
Color: Full color
CHRIS’ RECOMMENDATION:
Highly Recommended
Posted by Mr. Wilson at 3:01 PM