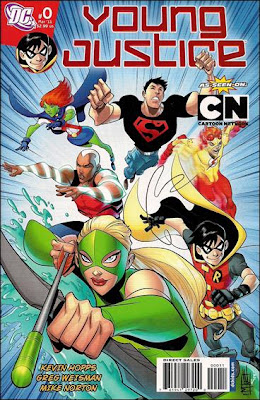 By Chris Wilson
Editor-in-Geek
STORY SUMMARY
The YOUNG JUSTICE comic is based on the Cartoon Network animated show by Warner Bros. The kid supers –– Robin, Super Boy, Kid Flash and Aqua Lad –– are ready to join the forces of the big boy and girl superheroes, but Batman has not given the A-okay for them to be fully-fledged members. It’s driving them crazy.
Most issues will feature stories by Greg Weisman and Kevin Hopps. The exception will be issues #1 - #6, which will be written by Art Baltazar and Franco (TINY TITANS and PATRICK THE WOLF BOY). The art will remain in the hands of Mike Norton (TEEN TITANS GO!).
The comics will, according to various sources, be an extension of the cartoon not replicate it. For that, we thank you very much.
REVIEW
I don’t typically review one issue of a comic because, frankly, it’s hard to tell much from a single issue. Something about YOUNG JUSTICE intrigued me. I purchased an electronic copy on my iPad and just sat down and read for a little while one Saturday afternoon.
It’s plucky and full of adolescent emotion making it a teen target. The kid supers are teens but wish for more. Don’t they all? It was intriguing enough to make me want more. Not childish and not adult, YOUNG JUSTICE is an excellent superhero book for the middle school (or high school) classroom. The teens try to find themselves while simultaneously trying to carve out a place for their team with the adults –– a difficult task considering the enormous shadow that Superman, Batman, Wonder Woman, et. al cast.
ART REVIEW
The art is very stylized and reminiscent of the animated show. Like the writing, the art is distinctly teen and very cool.
AGE RECOMMENDATION
Chris’ Rating: Ages 13 and older (classroom); Ages 8 and older (home)
Publisher’s Rating: All ages
Because of some mild language –– pissant for instance (which I always envisioned being spelled piss-ant until I looked the word up to make sure), and my suspicion that it might deal with more teen situations in the future, YOUNG JUSTICE might be best with two age recommendations: classroom (13+) and home (8+).
For the classroom, I suspect ages 13 and older might be best in most cases. However, a teacher might choose to offer YOUNG JUSTICE as a Parent Permission Required book for younger kids.
When it comes to home use, if my daughter were in elementary school, I would let her read it. Ultimately, it is all about community standards and school culture.
BE AWARE
Mild profanity.
IN THE CLASSROOM
The teens are not those of yesteryear. They are contemporary teens, which means students would be able to relate easily. There could be so many ways to incorporate YOUNG JUSTICE into the classroom: social skills, adolescence, the search for independence, bullies, anger, etc. Typical teenage problems.
OTHER INFORMATION
Authors: Greg Weisman and Kevin Hopps
Illustrator: Mike Norton
Publisher: DC Comics
Genre: Superhero
Format: Monthly comic
Pages: 32
Color: Full color
CHRIS’ RECOMMENDATION:
Recommended
Posted by Mr. Wilson at 11:25 AM

Young Justice, looks very catchy. I just recently started reading DC comics, and I'm liking it a lot. Hmmm... maybe I should give this a try :)