THE SEVEN VOYAGES OF SINBAD 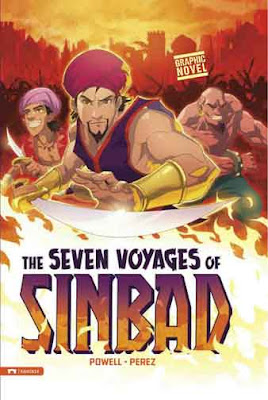 By Kevin Hodgson
Staff Writer
STORY REVIEW
When I was a kid, I used to walk to the one-dollar movie theater in our town every weekend to catch the matinees, and one of my favorite movies was Sinbad the Sailor. THE SEVEN VOYAGES OF SINBAD is a version of those stories, and like the movie it seems a bit short on story. It occurred to me as I was reading this graphic novel that to cram seven stories into a single book might not have been such a great idea.
We barely sink our teeth into one adventure when, suddenly, Sinbad finds a way to survive calamity and is off on another adventure. Of course, so much of the THE SEVEN VOYAGES OF SINBAD is stolen from The Odyssey, which is fine (heck, everyone steals from Homer). I just feel as if Sinbad deserves a larger canvas for his daring personality, his huge heart and his ability to withstand all sorts of danger. I guess you could view THE SEVEN VOYAGES OF SINBAD as an introduction to the character more than a definitive collection of stories.
ART REVIEW
The artwork in this Stone Arch book is high quality, full of color and differentiated spreads that highlight monsters and the bravery of Sinbad on his seven adventures. One page stuck out for me. When Sinbad is trapped on an island of elephants and forced to consider killing one for its tusk, the elephant king looms large on the entire page, showing the size and power of the animal. This was very effective and is indicative of the art by Ferran.
IN THE CLASSROOM
For readers who love adventure, THE SEVEN VOYAGES OF SINBAD is a nice addition to the classroom library in the elementary classroom. Stone Arch books again does a nice job of providing “extras” at the end of the novel, so that students can learn more about the Arabian Nights series of stories (this book is one of a collection of Arabian Night graphic novels) and real-world explorers such as Magellan and Ponce de Leon. A set of discussion questions and writing prompts is also a handy resource for teachers.
MORE INFORMATION
Reading level: Young Adult
Format: Hardcover
Pages: 72
Publisher: Stone Arch Books
ISBN-10: 1434219879
ISBN-13: 978-1434219879
MY RECOMMENDATION
I recommend SINBAD, but mostly for the entertainment value. I wish there was more depth to the stories and characters. THE SEVEN VOYAGES OF SINBAD could use a few more years at sea, so to speak. But it is appropriate for elementary and middle school classrooms.
Posted by Mr. Wilson at 9:57 AM

Ooooh! Sinbad! I remember reading the book and watching the movie as a kid. I hope I can find this in a nearby library :)