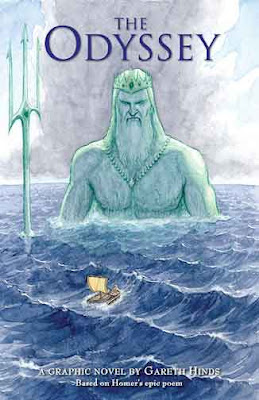 By Chris Wilson
Editor-in-Geek
High school and college English instructors seem to abhor the adaptation as a baleful attack upon classic literature and classic education. That to read such things is to demean the original and toss it aside as bothersome rubbish.
I get that viewpoint. We love literature and want to protect the integrity, uniqueness and historic significance of those tomes special to us and keep them from being watered down. I want students to experience WATCHMEN as comic literature and not simply to watch the movie adaptation and then skip the graphic novel experience. So I can relate.
Besides, adaptations often make unnecessary changes, delete important sections or themes, get it wrong, or bastardize the story at the alter of mass-acceptance and entertainment. I was upset at the adaptation of PERCY JACKSON AND THE OLYPIANS: THE LIGHTING THIEF and was furious at the movie adaptation of AVATAR: THE LAST AIRBENDER. Don’t get me started on that one. Who mispronounced the character’s names?
I get it.
On the other hand, I think good adaptations can provide students with an invaluable introduction to a story they might otherwise skip. Gareth Hinds’ comic adaptation of Homer’s THE ODYSSEY is an excellent example of such scaffolding.
Hinds, who is known for other great adaptations of classic work (BEOWULF, THE MERCHANT OF VENICE and KING LEAR) takes great pains to create a comic version that is academic and maintains the integrity of the original. The narrative of the story is true to voice of the poem. Hinds does not sacrifice the story in order to focus on action and he does not overly condense the story. At 250 pages of story and notes, Hinds tips his hat most reverently to the blind poet.
The question remains: What does the English teacher do with the comic adaptation? Does he substitute the comic for the poem? Does she ignore the comic and proceed with the poem? I know of no serious comics educator who believes comics should ever supplant traditional texts. That leaves only two choices: ignore the comic or infuse it with the original.
For many of our contemporary students, our classic works have lost their appeal and relevance. That is to say, the kids are extremely reluctant to even give that old stuff a chance. It’s a shame, no doubt, because there is so much to be learned about life from our literature. Therefore, it becomes our responsibility to instill in students a love, respect or at least an understanding for these classic works.
I argue that comic adaptations of classic works can provide the scaffolding necessary to bring students to the place where they can understand, appreciate and even love classic stories. I have several fourth grade boys in my Hall of Heroes comic book club who are reading adaptations of THE ODYSSEY. They are incredibly excited about these titles and are impressed with themselves that they are reading stories 3,000 years old.
That’s the key. When these students move into the high school or college classroom, they will have an understanding of THE ODYSSEY, a foundation from which to pull when they read the poem. My students will not spend their time decoding and understanding the basics of the poetry. They already have the story. They can spend their time hearing the intricacies of the writing, the movement of the poem and the beauty of the language. It is my contention that my kids, having previously read and made sense of a comic adaptation, will not shy away from the poem in high school. They will attack it excitedly and with confidence knowing they have a base from which to draw upon.
It is that excitement and, quite frankly, that confidence in their own literacy abilities that high quality comic adaptations can provide students. In fact, I think a case can be made that comics can help students connect with and find relevance in classic works. Not all students come to the high school or college English class having read comic adaptations of the titles to be studied. So teaches must scaffold their teaching.
Students could read the comic adaptation first, gaining experience with the language, story, narration, and basic themes. Then follow up with a deeper and more meaningful reading of the traditional novel where the nuances can be further explored. Comparisons and contrasts between the two can also be explored. I would not do this with every novel, but I might use it with my most complicated or difficult text during the year.
Hinds’ graphic novel adaptation is a worthy title to consider with this approach. It is beautiful, detailed, appropriately paced and I believe would help engage more readers in the process of loving classic works.
OTHER INFORMATION
Author & Illustrator: Gareth Hinds
Publisher: Candlewick Press
Genre: Comic Adaptation of Traditional Literature
Format: Hardcover
Pages: 250
Color: Full color
ISBN-10:
ISBN-13: 978-0-7636-4266-2
CHRIS’ RECOMMENDATION:
Highly Recommended
Posted by admin at 12:56 PM

You make an eloquent argument that also makes perfect sense for the use of graphic adaptations of classic literature. Graphic novels do not want to muscle out the good stuff, only lead students toward a better understanding of it. Why can't we make room and time for both in the classroom if, in the end, this combination fosters skills development, content acquisition, and a love of stories?