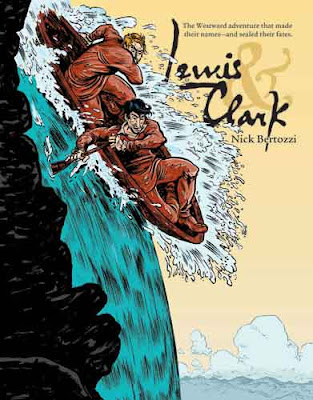 By Kevin Hodgson
Staff Writer
STORY SUMMARY
Most of us know the tale of the explorers, Lewis and Clark, but in this graphic novel, Nick Bertozzi brings considerable skills of storytelling and graphic novel virtuoso to us into the famed exploration of America’s wilds. Bertozzi uses plenty of humor, setting and character development to show the reader how difficult the journey was, and also, how resourceful (and lucky) the two explorers and their crew were as it set out to map the lands of the Louisiana Purchase, as pulled off by President Thomas Jefferson. LEWIS AND CLARK is full of historical anecdotes and important dates, but we never lose site of the two main characters, later joined in story by Sacagawea, of course. It’s an adventurous tale, told here in graphic form.
ART REVIEW
The black and white drawings by Bertozzi give a good sense of the landscape and open areas that were explored by Lewis and Clark, as well as the many dangers and predicaments the two were put into, along with their men. Bertozzi wisely uses the oversized pages to his benefit, stretching out frames to give the reader a wider angle or narrowing the frame to demonstrate danger or confinement.
I have to admit, though, that I had a little trouble differentiating some of the characters at the start of the book, until I realized that Bertozzi had smartly given a shadow to Lewis’s nose (or, I think it is a shadow), which was a nice visual cue for me. Another use of visual cues is the font choices when different languages are spoken. Although translated for the reader, the writing styles indicate the difficulty of language barriers during the expedition.
IN THE CLASSROOM
The study of explorers is a main element of most elementary school curriculums, and I’ll bet that some reluctant readers of a traditional biography format would eat up LEWIS AND CLARK, and gain a lot of knowledge about their work in doing so. This book is factual, as far as I can tell, useful and interesting.
MORE INFORMATION
Reading level: Young Adult
Format: Paperback
Pages: 144 pages
Publisher: First Second
ISBN-10: 1596434503
ISBN-13: 978-1596434509
MY RECOMMENDATION
I highly recommend this book for any classroom, although I think it might have more learning relevance for elementary students or middle school students who may be studying the great explorers, such as Lewis and Clark.
Posted by Mr. Wilson at 10:01 AM