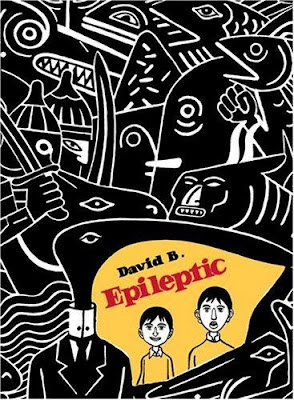 By Nate Stearns
Staff Writer
REVIEW
Two questions that my fellow teachers still ask me when it comes to teaching graphic novels are: Aren’t they just comic books? and What are graphic novels good at? ­The first question is easily answered in the traditional way—suggesting a quick read of MAUS.
The second needs a bit more work, I think, and the answer isn’t necessarily a consensus, but I usually reply: graphic novels are most successful when they involve memoir or an unusually personal first person narrative.  That’s not to say that graphic novels can’t do history or epics or even traditional genre material.  Of course they do.  But the graphic novels that excite me and suggest that the movement has a future are those that trace the personal journeys of idiosyncratic people engaging the world in novel and fascinating ways.
I think of Alison Bechdel’s FUN HOME, Marjane Satrapi’s PERSEOPLIS series, and Josh Neufeld’s A FEW PERFECT HOURS.  But before all of those came David B’s EPILEPTIC. 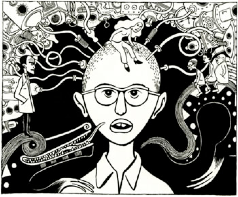 Originally published in Paris from 1996-2004, EPILEPTIC chronicles the Beuchard family living in a small town near Orlean, France.  At first the two boys—Pierre-Francois and Jean-Christophe—live lives packed with the minor dramas of childhood. They roam the streets in packs and harass lovers making out in cars. Before too long, however, Jean-Christophe suffers from devastating seizures. He falls into horrifying, drooling convulsions at the breakfast table and his brother, whose imagination is already set in overdrive, imagines his brother wavering between worlds, as if he is undecided between living in our dull, straight-edged world and the epileptic’s terrifying, but phantasmagoric one.
His family tries everything to cure Jean-Christophe. They go through a parade of doctors who massage his feet, feed him macrobiotic foods, electrocute him, suggest experimental operations.  There are also a series of gurus who suggest intense massage and acupuncture. Throughout it all, young Pierre-Francois’s relationship with his brother becomes more and more difficult. His love is twisted with fear and envy, disgust and grief.  Pierre Francois retreats into his artistic world as a refuge from the ways in which his brother and life have disappointed him. 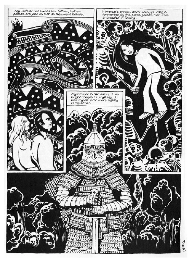 David B’s art is the real treat here.  Though there is a clear debt to R. Crumb, B’s art maintains an attitude of sweetness that leavens the ugly-on-purpose depiction of faces and bodies.  There is also something here of Charles Burns’s black and white stark art and willingness to merge realistic art with surrealistic dreamscape freak-outs. I would even say there’s an element of mythic symbolism to his work; the spinning and cascading figures crowd both boys’ minds and jostle for prominence.
TEACHER RECOMMENDATION
While my first attempt at getting graphic novels into the door at my school would be a double shot of MAUS and PERSEPOLIS.  My next trick would be to try and tie EPILEPTIC to another bildungsroman like A Portrait of an Artist as Young Man.  An AP lit class or an accomplished Senior literature class could handle this with maybe a supplemental injection of Scott McCloud’s UNDERSTANDING COMICS.
OTHER INFORMATION
See New York Magazine’s excellent review of EPILEPTIC.
Format: Paperback
Volume: 1
Pages: 363
Color: Black and White
ISBN-13: 0-375-71468-5
Posted by admin at 12:51 PM