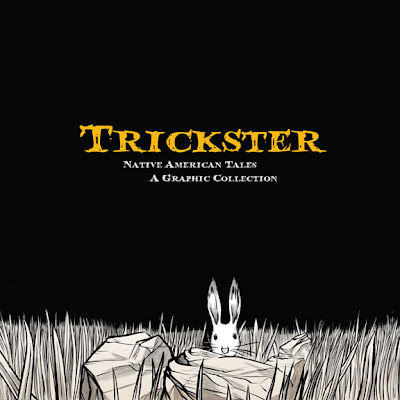 By Chris Wilson
Editor-in-Geek
STORY SYNOPSIS
TRICKSTER: NATIVE AMERICAN TALES is an anthology of authentic cultural stories from 21 indigenous tribes representing various geographic regions. The stories focus on the Trickster, a cultural icon in the Native American oral tradition.
From the jacket: “Meet the Trickster, a crafty creature or being who disrupts the order of things, often humiliating others and sometimes himself in the process. Whether a coyote or rabbit, raccoon or raven, Tricksters use cunning to get food, steal precious possessions, or simply cause mischief.”
REVIEW
TRICKSTER: NATIVE AMERICAN TALES is the single best graphic collection of Native American folklore I have ever encountered.
Oftentimes attempts to bring indigenous stories to the masses end up with nothing more than culturally insensitive, stereotyped, sanctimonious tripe. When Matt Dembicki decided to create an anthology of comic-adapted Native American tales, he focused his efforts on three aspects: sensitivity, authenticity and storytelling.
Knowing the pitfalls of other attempts, Dembicki first located authentic tribal storytellers from geographically diverse tribes across the US and created a relationship with them. In keeping with the oral tradition, those storytellers conveyed their tales in their own way. Dembicki explained that some chose to scribe their stories and mail them to him while others dictated the stories over the phone. “The way they tell the stories is the way it was presented,” said Dembicki.
He then examined each story and storyteller’s voice and created a list of prospective artists whose style would match up with the oral story. Dembicki then presented that list of 3-5 artists, with samples of their work, to the storytellers.
In what seemed a rather surprising but collaborative effort, Dembicki gave the storyteller the final choice of artist. Giving editorial control over to the storyteller allows the reader to experience the cultural roots of the tribal story. In a back-and-forth process, the artist would send sketches to the storyteller to ensure accuracy and authenticity. The storyteller would make suggestions or comments. Not all of the art spoke to me as a reader, but the knowledge that the artist was purposefully chosen and the art was continuously verified for accuracy gave me a strong sense of respect for and connection to the tribe and its identity. 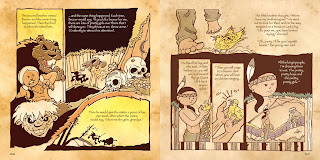 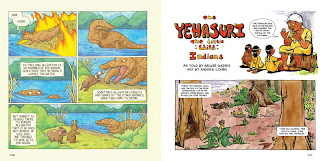 The entire process took Dembicki four years, but it is a worthy four years. The outcome is an authentic and culturally sensitive volume telling the tales of a varied culture in a way that is accessible to children and adults. Some stories are obviously intended to teach young Native American children certain rules or lessons. Others are origin stories describing how the stars came to be or why the rabbit has a short tale. All of them have aspects for adults that will be lost on children. The art is as diverse as the tribes or the storytelling, which adds to the breadth of the varied native cultures represented. The audience is reflected in that diversity.
Every classroom that is charged with studying culture – elementary, middle school or high school or college – should stock a copy of TRICKSTER: NATIVE AMERICAN TALES.
AGE RECOMMENDATION
Chris’ Rating: Ages 8 and older
Publisher’s Rating: Ages 8 and older
IN THE CLASSROOM
The study of various cultures is included in state and national standards. Oftentimes, Native American cultures are only lightly taught and it is often, unintentionally, culturally insensitive, especially when Native American studies are combined with Thanksgiving. A Skype session, email or letter exchange, blog conversation or Facebook discussion with some of these storytellers –– many of whom make a living retelling their tribes’ stories –– would be an authentic approach to understanding Native American culture and help the students understand the implications of the comic folktales in the anthology.
OTHER INFORMATION
Editor: Matt Dembicki
Authors: Various
Illustrators: Various
Publisher: Fulcrum Books
Genre: Folklore
Format: Paperback
Pages: 232
Color: Full color
ISBN-13: 978-1-55591-724-1
CHRIS’ RECOMMENDATION:
Highly Recommended
Posted by Mr. Wilson at 8:20 AM

I picked this book up a month ago at a small book store who had a collection of Native American fiction/non-fiction section. the cover caught my eye. I enjoyed the stories I did read and entered a note into my phone to check it out from the library (as I was just browsing). I liked the collection.

your post reminded me I need to pick this book up, and the information you provide about it's creation has me doubly excited to get my hands on this brilliant work.

thank you for the review..