THE INCREDIBLE ROCKHEAD VS. PAPERCUT 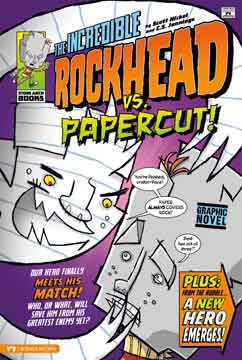 STORY REVIEW
THE INCREDIBLE ROCKHEAD VS. PAPERCUT is the third in a series of ROCKHEAD books put out by Stone Arch Books. Visually appealing, the books are a bit light on story and character development. In this edition, the superhero Rockhead –– the alias of nerdy Chip Stone –– must do battle in the school cafeteria against Papercut, formerly the school bully known as Troy Perkins. There’s a back story of a villain named The General out to get Rockhead by helping to create Papercut, but that’s not really all that important. Instead, think of the playground game of rock-paper-scissors, where paper covers rock, and soon enough Rockhead is in trouble. That’s the plot by writer Scott Nickel (who works by day at Paws Inc., the studio of Garfield’s Jim Davis). What saves the day? Scissors, of course, because scissors cut paper. So Chip’s friend, Spencer, transforms himself into Scissorlegz to save Rockhead, and the story is over in a flash.


ART REVIEW
It’s the art by C.S. Jennings that will get this book into the hands of your students, particularly those who are amused and entertained by superhero comics. THE INCREDIBLE ROCKHEAD VS. PAPERCUT is designed to look and feel like a classic superhero comic, complete with a fake advertisement, a fake cover, and more. The art is playful, colorful, and oversized. The covers of the ROCKHEAD books are no doubt what will attract the attention of your students.


IN THE CLASSROOM
Like most of the Stone Arch books, there is a handy glossary at the back of the novel for the difficult vocabulary thrown into the story. And they’ve kept the playful theme of the book intact, making the vocabulary words “…brought to you by The General’s nerdy sidekick …” There is also a series of writing prompts, which come in the form of a goofy newscaster for K-ROC News 5, and readers will no doubt chuckle with the villain, Papercut, interrupts the newscast.

MY RECOMMENDATION
I wish this book had more substance to the story and characters so that I could make a better recommendation for the elementary classroom. Middle school readers would be bored, I think. I recommend it, but not very highly. Given the budget constraints of most teachers, I would suggest putting your library dollars elsewhere. But if you have any of the ROCKHEAD books given to you, put them out and I suspect they will get read. Read quickly, perhaps, but still, read.
Posted by Mr. Wilson at 9:31 AM