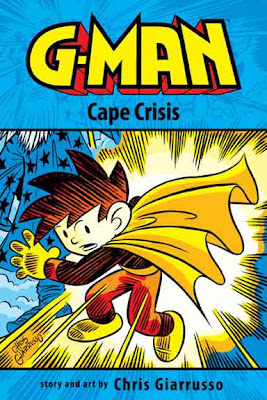 (EDITOR'S NOTE: This review is by my 10-year-old daughter. She was given our template and the  five issues of the G-MAN: CAPE CRISIS comic, which are now available as a single trade paperback. Everything written is hers; I gave her no writing instruction. It should be noted that we previously published a G-MAN review. We rated it Highly Recommended with Reservations because of some language. Since that publication, the story has been revised and expanded by Chris Giarrusso. The "Jesus Christ!" exclamation and smoking (although hilarious) were removed to make it school appropriate. We, too, revised our recommendation giving it a straight up Highly Recommended for hilarity, pop culture references and all around coolness.)
STORY SUMMARY
In these 5 continuous issues of comics, G-Man is a kid who lives with his mom, dad, and older brother. (You can tell the difference between these boys by their hair. Great Man has his hair combed over and G-Man has his hair spiked up. You can also tell by their costumes.) People start complaining that G-Man doesn’t share his super-powers. (G-Man and his brother have a magic blanket. G-Man made a cape and Great Man made a belt.) Some other people wanted to try out the magic cape. G-Man explained that it was his magic cape. But, one of his friends persuaded G-Man’s friends that he was being selfish. G-Man had a weak spot and let people try it out. It got out of hand because when it was time to give the pieces back; no one wanted to give them back. G-Man and his friends with super-powers helped chase down the kids and get the pieces back. Glendolf, G-Man’s wizard friend, helps G-Man’s friends with super-powers track down the kids who wouldn’t give the pieces back. They realize the magic being given to other people is a bad thing because the magic in the cape is unstable. The pieces that were given out had corrupted the cape. G-Man and his powerful friends must bring back all of the pieces. Glendolf must try to fix the cape with the help of Khrysomallos. (But you may call him Khrys!)


STORY REVIEW
I thought the book(s) were a little bit confusing, but a great series. For instance, G-Man’s color-changing friend. It may be depending on his mood. Or that may be his way of blending in. Or it could be just what he does. I still haven’t figured that out, yet! Other than that, great books, great series because of the interesting problems that G-Man’s in. It just alarms me what happens in the story because the book tells you over and over. So, incredible book, fantastic series!


ART REVIEW
I think the art is completely incredible because it shows if you fly or not. It shows the reaction on people’s faces when they see someone flying! If the art shows two people mainly in the panels, it shows not just them, but also other people and their reaction to what’s going on mainly in the story.


AGE RECOMMENDATION
My Rating: 9 and older


MY RECOMMENDATION:
Recommended
Posted by Mr. Wilson at 10:18 AM

what a fantastic job on this review!

i have just the person in mind for this series (other than myself and my own 10 year old daughter).

thanks for the review.