THOUGHTS ON TEACHING KINGDOM COME IN A COLLEGE ENGLISH COURSE 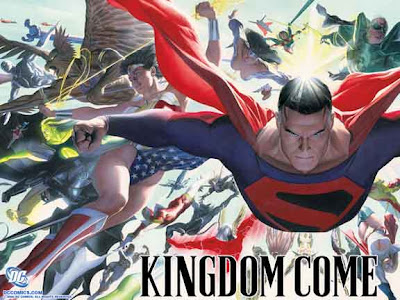 
I was given the opportunity to teach freshman English while I was still going through my graduate studies at San Francisco State University. SFSU offers three sections of freshman English and students are placed in these particular sections based on what score they receive on their placement test. English 114 is a freshman composition course, whereas English 106 and 104/105 is Integrated Reading and Writing (IRW). The term “developmental” isn’t necessarily used to label English 106 and 104/105 because the students are doing the same level of work as English 114, but just given more time. English 106 is approximately 30 minutes longer than an English 114 course and English 104/105 is a year-long course.

I was given the pleasure of taking on an English 104/105 course which was very challenging, especially since it was my very first time teaching. I had 18 students and everyone was bilingual. The majority of the students were Generation 1.5, along with two international students and two students who were native speakers, but spoke in another language besides English at home. Most students showed signs of an ELL writing pattern, i.e., subject/verb agreement, verb tense, or writing in a speech based manner. These students were also inexperienced readers, specifically in the area of reading comprehension, so this invited me to think about bringing in a graphic novel.

KINGDOM COME was my main choice, perhaps due to the superhero genre. Everyone was familiar with superheroes, or at least familiar with Superman and Batman, since movies had recently been made about these two iconic characters. I also felt the graphic novel was rich in the visual and verbal aspects. Alex Ross’ beautifully painted images gave a realistic feeling to superheroes and Mark Waid’s writing was filled with great vocabulary and storytelling. The biggest mistake I made was assuming these students read comic books and were familiar with the superheroes from DC comics. S imagine my reaction when I found out none of them had ever read a graphic novel and knew very little or nothing about superheroes.

Since I had this class for a year-long, I decided to solely use KINGDOM COME on its own during the first semester. The graphic novel was conveniently divided up into four chapters, so after ending each chapter, an essay would be assigned in regards to the chapter. During the first four weeks of the semester, I front loaded the course by giving the students tools and strategies on how to compose a college essay as well as giving low-stakes writing assignments to get students to start brainstorming and thinking about the concepts that were being presented in the first chapter of the graphic novel.

However, before asking the students to start reading the graphic novel, I created a reading guide for them, giving them a step-by-step approach as to how to read the panels, speech bubbles, and the images, i.e. symbolism, allegory. This aspect was perhaps the hardest to get across to the students, most likely because I didn’t know how to approach it and I made the assumption that the students would automatically pick up knowing how to read the graphic novel. I then decided to take the first few pages from KINGDOM COME to use as a model on how to read the graphic novel. I first only showed the students text from these few pages, asking them to articulate what they thought the meaning of the text represented or was trying to say to the reader. I then showed only the images that the text was taken from, then asked students what they thought the images were trying to convey. Then upon bringing the text and image together, students began to understand that they needed to pay attention to both the text and image. I then assigned students to do a research presentation on the main characters within KINGDOM COME, just so they could have background information to rely on once they started reading.


KINGDOM COME had many issues and themes but because my class had the most difficulties with comprehending the text and images, we didn’t necessarily cover most of the subtle themes. However, morality seemed to be the biggest debate within the classroom, since the majority of the students sided with Superman’s character whereas only a few students sided with the anti-hero’s views. This seemed to also to tell me which students were looking at the graphic novel on a superficial level, i.e., Superman is a hero because he’s strong and good, compared to students who were reading the graphic novel in a critical manner, i.e., even though Superman is a hero, he can’t be everywhere because he’s still just one man.

Overall, the students really enjoyed reading a graphic novel and some were very surprised that they would be reading one for their English class. Day by day, they started to display more interest in the superhero genre (some did research on the Justice League or began to pick up comics on their own) as well as trying to understand the complexity of the hero and villain archetypes in stories.

What I remember fondly about this group of students was them telling me that they couldn’t stop re-reading the graphic novel. Although they got through the entire graphic novel very quickly, they didn’t mind re-visiting it to look more closely at a certain concept or page. Also, I presented very challenging writing assignments to the students. They needed to refer to the graphic novel for evidence and support, and basically construct a college essay with the context of superheroes. This definitely was not an easy task, but this seemed to motivate the students to write, especially the ones who were struggling with their writing. In the end, I asked the students to write letters to Alex Ross and Mark Waid on what they learned about reading and writing from KINGDOM COME. I was impressed with most of what they had to say because the students wrote their letters with confidence, so I could tell that they recognized their own growth as readers and writers.

In regards to what didn’t go well and what I would do differently, I’m still optimistic in trying to use a graphic novel that has a lot of history or continuity, but KINGDOM COME was just a little too rich in that aspect. The graphic novel definitely required a lot of time (which I thankfully had) just to get students to understand the KINGDOM COME universe. The next difficulty would be trying to understand why students were reading very literally and this may just go back to students being inexperienced readers. Only one student managed to dig a little deeper with the religious theme that surrounded the graphic novel, while other students were perhaps just trying to understand the entire graphic novel. I also wasn’t prepared in guiding students through with just understanding how to read the graphic novel. This came to be the most difficult aspect since some of the students still ended up only looking at the images and disregarding the text. I would imagine the first step to stress to students is jut how important it is that a graphic novel requires the reader to interact with both the image and text.
(EDITOR'S NOTE: It is important for teachers of all levels to hear about and learn from the comic book teaching experiences of other educators. We encourage other teachers to submit your reflections on teaching comics in the classroom (elementary, middle school, high school or college) to The Graphic Classroom. Send queries, ideas or submissions to abikerbard@mac.com)
Posted by Mr. Wilson at 3:37 PM