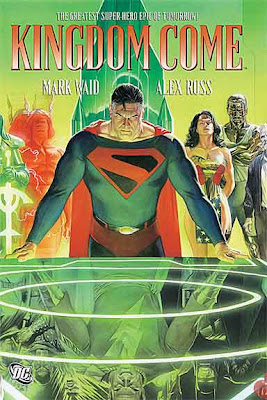 STORY SUMMARY
The superheroes of old have moved into their twilight and handed the reins to the next generation, but those new heroes do not possess the guiding principals of what it means to be a hero leaving them to squabble and destroy one another in a pathetic power struggle. The old guard must come to grips with their mistakes and regrets to bring the world back into balance.


REVIEW
I feel excitedly overpowered, if not pathetically ill prepared, to review KINGDOM COME with its religious overtones, political allegory and social commentary. What makes KINGDOM COME special is the fact that it can be deconstructed with so many lenses and viewpoints. The narrative is simultaneously apropos in the political science, religion, sociology, psychology, war history, philosophy, gerontology and, of course, the literature classroom. It would take a master’s thesis to explain the implications of KINGDOM COME, which is what makes it so beautiful and wonderful.

Such intricacies, while too much for the meager review, demonstrate the importance of comics to literature, to our society, and to our own sense of self. KINGDOM COME is important to civilization because it taps into us in relevant and applicable ways by speaking many languages –– philosophical, religious, and political –– and giving readers an opportunity to explore our vast world of competing (and sometimes conflicting) ideas.

KINGDOM COME is, without a single hesitation, one of the greatest comics I have ever read. It is canonical, academic, philosophical, and should be taught in schools.


ART REVIEW
The gouache-painted pages are exquisite in color, tone and detail. The style is so powerful that it stops being a page and becomes an image imprinted onto the brain as if I witnessed the scenes in real life. The art is a thing of beauty.


BE AWARE
No nudity, small amounts of minor cursing, and comic war.


IN THE CLASSROOM
The trick with KINGDOM COME, as first explained to me by Staff Writer Ellen Ma, is building a foundational superhero understanding from which to deconstruct. Her reflection on using KINGDOM COME in a college classroom can be found here. After I read KINGDOM COME I understood her point of view. The text supposes the reader comes with knowledge of the caped and the cowled –– a place from which to begin to decode the comic and assimilate it into one’s schema. Some history, research, context will be necessary for students to attack KINGDOM COME, and attack they will when it is treated with respect, enthusiasm, and a short history lesson.