THE KING OF SOCCER 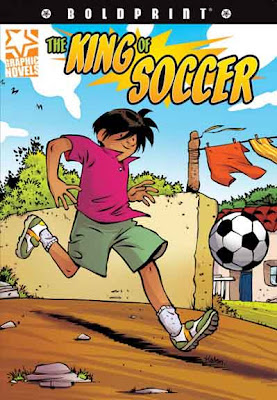 STORY SUMMARY
Eleven-year-old Pablo has big plans for his life –– soccer is going to be his way out of a life of working in the field with his family in rural Peru. And he has the talent, too, developing a real love for the game. But life takes an unexpected twist in THE KING OF SOCCER when Pablo is working in the fields with his family one day. The boy acts on instinct to save the life of a farmhand from an oncoming tractor by putting himself in harm’s way. As a result, Pablo gets injured and has to have his leg amputated.


STORY REVIEW
Writer David Suchanek brings us inside the world of dashed dreams, but also, he wisely gives Pablo a fighting spirit that slowly brings the young boy back to the soccer fields. While Pablo’s prosthetic leg makes it nearly impossible for him to return to the position of striker on the field, he realizes that he can still use his soccer instincts in the goal (where he saves a game for his team), and then later, as a coach of others (including his younger sister). Simply told for young readers, THE KING OF SOCCER is a celebration of the spirit and invites us to move beyond limitations in life.


ART REVIEW
The artwork here is simple and it is not necessarily all that rich in details, but the story is what remains in focus. The faces of characters don’t always seem fully defined by illustrator Hatem Aly. It seemed to me that noses and eyes seem to shift across the faces, making for a bit of an odd look.


IN THE CLASSROOM
THE KING OF SOCCER is just one of about 60 new graphic novel titles put out by Boldprint (from the Oxford University Press) and the books are thematically connected to existing young reader novels from Boldprint. I think it would be interesting to have copies of both the novel and this graphic offshoot, and have students think and write about how one informs the other (or not).

I imagine I would learn more about Pablo and his life in Peru in the novel than I do here with THE KING OF SOCCER. That is not a criticism, as this graphic novel is about Pablo’s spirit to endure. I also like the discussion questions that follow each of these graphic novels. In this book, for example, the reader is asked to re-examine the importance of soccer to small towns in Peru and to think about the relationship between Pablo and a rival on his team, Jose, who later apologizes for being so competitive on the soccer field.

I would recommend this book (and many of the others in the Boldprint series) for elementary classrooms. I think the reading level is right around 7- to 10-years old, and for a classroom collection, THE KING OF SOCCER and others would be a perfect addition and would open up some reading choices for students.
Posted by Mr. Wilson at 4:25 PM

How can I get a copy of this book? I've searched Baker and Taylor, Amazon, etc., to no avail. I'd love a copy of it from reading your review.

If you click the publisher's link in our review, it will take you to their US distributor where you can purchase a set. You could email them if you wanted different books, just one copy, or multiples.

To save you time, here is the link:

I was glad to find someone reviewing a book I illustrated :)
Thanks for the feedback and honest opinion..I appreciate your words ..feel free to visit my blog..actually I had some sketches pre-making the book at this post :)
http://metahatem.blogspot.com/2009/10/pablo.html