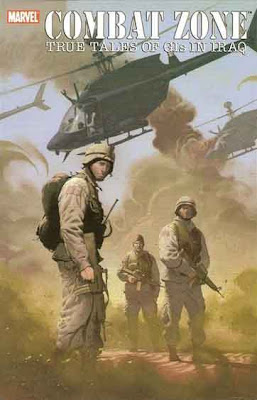 REVIEW
I strolled through the shabby entrance of the north side hotel along the Interstate and made it five paces into the door before the hotel employee pointed to my right. “It’s right down the hall on the right,” he said. I was wearing a Superman t-shirt, but I suspect I didn’t need to for him to know that the bald, spectacled, overweight guy was looking for the comics.

I made my way to the painfully small and dreadfully underused room in the back of the hotel. Inside were six comic and toy venders from around the area. My students that showed up were disappointed at the size, but I assured them incredible deals could be found at small cons.

One of my fourth grade boys had no idea where to start. So we sat down on the floor together, his mother right behind us, and we pulled out some long boxes sitting under a vendor table. We thumbed through the trade paperbacks (tpb) pulling out titles when he hit his gold: a war comic.

He flipped through it and I looked up at Mom for approval. “I’d let my daughter read it,” I said. She nodded and he held it tight against his chest. He was done. That was it; he knew what he wanted. We had to encourage him to spend the rest of his allotted cash on some other titles. Finally he culled through the bags and boards until he found a few issues of mainline superheroes. Off he ran to read his war comic.

COMBAT TALES is a true account of the 82nd Airborne during the Iraq War in 2003-2004. Karl Zinsmeister, an embedded journalist with the 82nd chronicled the lives and experiences of these soldiers in two nonfiction books: BOOTS ON THE GROUND: A MONTH WITH THE 82ND AIRBOARD IN THE BATTLE FOR IRAQ and DAWN OVER BAGHDAD: HOW THE MILITARY IS USING BULLETS AND BALLOTS OT REMAKE IRAQ. The stories told in COMBAT TALES are adaptations from those books.

Zinsmeister does not glorify the war or heroize the soldiers, and he does not politicize the war. COMBAT TALES is a straightforward, respectful look at the job that soldiers perform in the sands of Iraq. Zisnmeister is in the thick of it all: secret strategy meetings, debates on approaches to accomplish the goal while protecting innocent civilians, guidance from commanders reminding the soldiers of the rules of engagements, and everyday soldier-speak.

Changed is the language. That is to say the only profanities are some hells and damns. I’ve been around enough soldiers to know that they can let it fly and I suspect Zinsmeisters sanitized the language to make it more palatable for the audience. However, Zinsmeister’s focus is not on the personal lives of the soldiers as much as it is on the their job and how they complete their work, in which case the necessity of authentic cursing is tertiary at best. The fights are depicted with minimal blood and carnage while still being true to the destruction. The feelings of the soldiers after the battle are explored as are the problems soldiers encounter when trying to do their job.

For those who have experienced war, it is important to them that American civilians understand the impossibility modern solider face in urban warfare. During engagements terrorists grab women and children by their hair and use those innocents as body shields to escape, leaving soldiers unable to complete their missions. Terrorists use hospitals, schools and crowds as cover. Terrorists wave white flags of surrender then kill soldiers as they get close. As Zinsmeister witnessed, Generals constantly remind their soldiers of the rules of engagement, especially after losing a comrade in battle the day before.

“I know it’s hard to experience those kinds of attacks and not be tempted to just lash back. But we’re not going to do that. We’re Americans. We don’t shoot women and children. We avoid damaging innocent neighborhoods as much as humanly possible. We don’t shoot people who are trying to surrender. Have you all got that?”

Zinsmeister sat in witness as a General contemplated the best approach to taking out two high ranking Baath party members plotting in a building 135 meters from a school and 200 meters from homes: Artillery, Kiowa Warrriors, urban guerilla warfare, a 2,000-pound satellite-guided bomb, Hellfires? The General and his crew had to balance the need to kill the terrorists with the needs to protect civilians and soldiers. It is all interesting and unexpected.

COMBAT ZONE is a tactical-focused comic that is highly engaging for students. I can almost guarantee a waiting list when I offer it in my comic book club.


BE AWARE
COMBAT TALES is about war. It is mostly bloodless with a couple of exceptions, and those are tastefully and minimally rendered. It is full of guns and splattered with minor curse words. It is war and war is hell, but the hell is very limited.


IN THE CLASSROOM
Because COMBAT TALES is a war story and is full of guns, it may not be appropriate for all schools or communities. However, it is a nonfiction piece about current events and is, in my opinion, very appropriate for elementary, middle school and high school.

There are obvious social studies implications, but perhaps not too many other curricular uses. From a reading motivation point of view this story will engross students, especially boys who are otherwise uninterested in reading, and on that alone it’s helpful. It does not glorify killing or war; the story simply tells the tactical tales of soldiers.


CHRIS’ RECOMMENDATION:
Highly Recommended
Because of the inherent reading motivations qualities COMBAT TALES holds for boys, it is a title that cannot be ignored.
Posted by Mr. Wilson at 5:09 PM