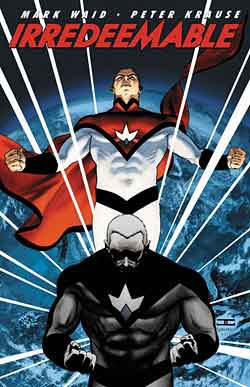 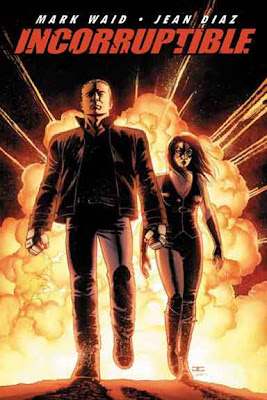 We all have our role to play, but when one of those roles gets changed –– reversed –– everyone's roles and lives go altogether catawampus. Good turns bad, bad in turn changes sides and when the heroes and villains have capes millions of people die. Thus is the story of Mark Waid's IRREDEMABLE and INCORRUPTIBLE.

IRREDEEMABLE explores the tension of living the heroic destiny and the pressure that comes with always being needed and loved (so long as you meet those expectations of need). More insidious and real is the pressure that beneath the need and love is a fear of the hero so profound that the fear permeates all social interactions no matter what level the relationship. Nearly god-like hero, Plutonian, can hear the fear on every human’s lips. He can hear heartbeats and worldwide conversations and he knows the love of him is superficial, fear-based, fake. His own foster family turned him away because of their fear of him, despite his good intentions, and so he seeks to prove humans wrong and he uses his powers for good. It is never good enough, and he finally cracks under the pressure of his own guilty, pain and too-good persona. 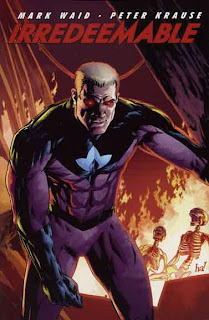 IRREDEEMABLE vol. 2
Waid's narrative cleverly investigates both sides of the fear: the fear of a god-like superhero's powers by weaker beings, and the fear on the part of the superhero to always be in control, always cautious, always careful. An all-powerful being does not learn about eggshells and fear but through the painful teachings of life experience, leaving him with baggage and his own suffering and insecurities. To be free from unimaginable strength, to love and touch without fear of inflicting pain, to be weak and mortal, even for just a short time, is as coveted a prize as any other. Any such dream is short lived and so release comes only in the form of uncontrolled rage, eventually proving those fears correct.
The Plutonian embarks on a worldwide killing rampage, destroying entire cities, annihilating masses of innocent humans, and hunting down his own former teammates. We ride along with the Plutonian and sympathize with his former colleagues because we understand his struggle because we fear our own possible of loss of control. 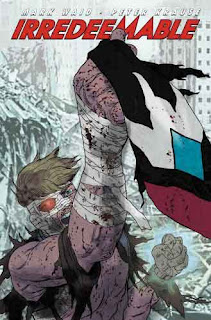 INCORRUPTIBLE, on the other hand, is the story of Max Damage, who (if it could not be deduced from his name) is a villain. Observing The Plutonian's team change, inspects his own heart. Max's first act as hero is to burn his ill-gotten millions, abandon his headquarters and stop having sexual relations with his underage female sidekick.

His conversion is less satisfying if not less convincing, but it provides a much less emotional motivation than The Plutonian's. Once The Plutonian slips into the abyss of mass genocide, Max understands that 1) he is no longer needed as a villain and 2) the world needs someone to play the role of hero. Such dispassionate conversions introduce two questions: Was Max ever evil (he did kill people) or was he just filling a role? Are strong emotional components such as pain and guilt required for one to have a real conversion or for that conversion to stick?

The sister titles are a wart-filled exploration of the human condition that asks some pointed questions, not about superheroes, but about plain old boring human beings: Are any of us irredeemable or incorruptible? Are our deeds and actions indicative of our inner souls? Is there such a thing as a good soul or a bad soul or do some simply fill a needed role?

Mark Waid goes all in with a dynamite narrative perfect for the classroom.


ART REVIEW
The art is very representative of modern American comics. Every element is detailed and the characters are easily identifiable. The colors are bright and explosive.


BE AWARE
There are a few curse words in both books, although there is more in INCORRUPTIBLE, as well as a couple of non-nude bedroom scenes.


IN THE CLASSROOM
Waid gives teachers an incredible story with which to investigate the hero and villain beyond black and white definitions or stereotypes. What makes a hero? Since we do not have superpowers in our real world, whom do we hold up as our heroes? Does that change depending on the age or generation of the person? Should some of our heroes really be heroes? How do they become heroes? How quickly do we abandon our heroes when they make mistakes, retire, or die?

I find these two characters, The Plutonian and Max Damage, incredibly interesting. One (Max) seems very analytical, calm and thoughtful, yet he is perceived to be maniacal and wild. On the other hand, The Plutonian is perceived to be in control when in reality he is the one fighting to always fight back his urges to let loose, which means destruction.
The Plutonian has a lot in common with humanity. The resistance of primal urges is a cornerstone of civilized society. Adolescents, in particular must work hard to control the mind and body –– an easier job for some than others –– in order to become good global citizens. IRREDEEMABLE offers something for students that has been heretofore inaccessible or at the very least less prominent: a look at good guys and bad guys from a new perspective. I find two things very compelling for the classroom: 1) The fight to control ones feelings and emotions, and 2) the imagery of who we are versus who others think we are and how that perception fuels our outcomes.

Highly Recommended
Despite the fact that there is some cursing in both books, but mostly in INCORRUPTIBLE, and a couple of bedroom scenes, I find these books worthy of the high school (perhaps even some middle school) classes.
Posted by Mr. Wilson at 4:31 PM