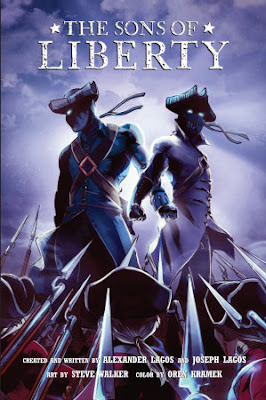 By Nate Stearns
Staff Writer
REVIEW
I come to graphic novels from a lit geek’s perspective rather than a comic book geek’s perspective (more MACBETH than Marvel in other words), so it tends to take a lot for costumed heroes to interest me. Kurt Busiek’s ASTRO CITY series, for instance, has enough complexity to intrigue even the most spandex skeptical, and something uncomfortably dark like Frank Miller’s DARK KNIGHT RETURNS can reinvigorate the genre. Still, it takes an effort.

However, reading SONS OF LIBERTY by Alexander and Joseph Lagos makes it clear that superhero comic books have inexplicably missed a huge opportunity: period piece superheroes. This story involves Graham and Brody, escaped slave boys of colonial America who, through a series of improbable misadventures, become imbued with superpowers when the evil son of Benjamin Franklin conducts mysterious electrical experiments on them. Their chief opponents are wicked slaveholders who employ slavering wolf dogs with very uncomfortable looking pointy collars to hunt escaped slaves. The Yoda role is played by Quaker Benjamin Lay (a real-life abolitionist who was apparently 4-feet tall and known for drinking only milk and water, ) who takes the boys in and teaches them an African form of martial arts. The first book explains their origins and even involves a massive kung fu fight with redcoats.

There’s a lot of promise in having black superheroes who — HANCOCK notwithstanding — are shockingly underrepresented in the caped community. Unfortunately, the superheroes themselves don’t get nearly enough focus. We see much more of Benjamin Franklin’s hand wringing than Graham and Brody’s perspective on their lives and struggles. It could be as the series develops their characters will become more fleshed out and interesting (especially their hunger to return to Africa), but in the first book at least they seem to be more enigmas than anything else.

For teachers, this could be a good book to have around for students to read in free reading periods — the African American protagonists and the general theme of self-reliance remain strong draws — but the actual amount to be learned about colonial America is still pretty limited. Maybe it’s the teacher in me that wants to see more robust detail about the role slavery played in the founding of America (for instance, Benjamin Franklin’s slaveholding seems to be glossed over) and the Founding Fathers’ participation in this. Nevertheless, a good teacher could use this book as a full class set and then use an inquiry-based lesson to flesh out the various historical figures in the book as well as the details of slave life. Still, would it be too much to ask to have, say, Thomas Jefferson as the Lex Luthor figure or would that result in such a tsunami of complaint that it would be banned in all 50 states (except maybe Texas?) 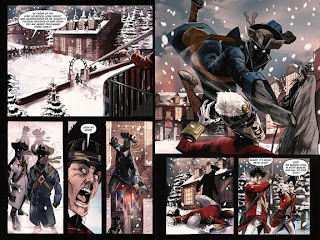 Alternatively, a joint English/Social Studies enterprise at involved creating either superhero stories set in other times (SuperPlato! Madam Curie/Radioactive Girl!) could set the world on fire. Social Studies teachers could mandate a certain pack of facts and concepts to be included and English teachers might look to teach the elements of story (exposition, conflict, resolution) to their students.

Here’s hoping that this spurs an entire subgenre of counterfactual history that gives the tired arcs of origin stories (http://en.wikipedia.org/wiki/Origin_story) and bad guy battles a new snap. Where’s Einstein teaming up with Dorothy Parker to rid the world of inter-dimensional monsters? Or Pablo Picasso using his Ring of Cubist Power to defeat the infelicitous demons of representationalism? OK, maybe only I would want to read that. Still, in the historical fiction/comic book mashup category there is Seth Grahme Smith’s recent ABRAHAM LINCOLN: VAMPIRE HUNTER or even the movie Brotherhood of the Wolf which involves French Aristocrats and Native Americans kickboxing werewolves. Grahme Smith is also responsible for PRIDE AND PREJUDICE AND ZOMBIES which spawned (sorry, couldn’t help it) a mini-movement of monster-izing classic literature.

For students, there is the worry that without a solid background of the actual history involved they might not be able to distinguish between what was real and what was not. For instance, Benjamin Franklin’s son in SONS is a villain, but it would be difficult for students to know that in history William Franklin’s conflict with his father was about loyalty to the crown rather than experiments in electricity. Some graphic novels that deal with history use extensive footnotes to mention these issues and SONS would be improved by doing the same.

Maybe my dreams of historical figures kicking costumed villain-ed butt is not far away. It is, I imagine, always difficult for counterfactual writers to decide when and where to depart from history and steer instead into their imaginations; the ideal is that even when we invent new events, characters, and settings, we bring some new insight to what has happened before.