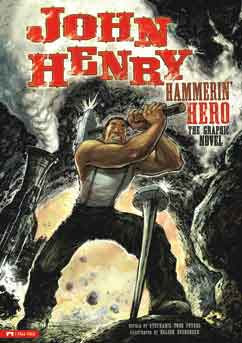 This is a classic tall tale of the powerful John Henry, a former slave who uses his brawn to help build a better America, and forge a better life for himself, only to be caught in a battle of wills against technology that arrives in the form of digging machines that will forever change the way work is done in the country.

Like Paul Bunyan, John Henry was special from the day he was born. Big, strong and full of curiosity, John Henry came out of the cradle with a hammer in his hand, ready to pound away. For all of the American tall tales, there are only a few that emerged from the stories of slaves, but the classic story of John Henry is one of them. This book, which is the tale retold by Stephanie True Peters, is just as I remembered it, with John Henry emerging as a hero of the working class at the end of the book, celebrated at his funeral not only for his hammer and his strength, but also because “...his heart was pure as gold.”

Earlier, on the day the family is freed from slavery at the end of the Civil War, John Henry tells his mother that he is going to “make my mark upon the world, Ma,” and you just know he is going to do it. If there is a complaint here, it is that the racism surely faced by freed slaves such as John Henry is barely mentioned. The color of one's skin isn't a factor in this story, even though his epic battle against the machine could be seen as symbolic of this struggle. But given the audience for tall tales, perhaps this is a wise move.


ART REVIEW
The illustrations in this book by Nelson Evergreen are wonderful to look at. The dark colors and pictures really capture the characters. John Henry, in particular, is a glorious sight to see, with rippling muscles, a huge smile on his face that belies intelligence, and he carries the look of someone who is about to change the world, whether the world is ready or not.


IN THE CLASSROOM
Stone Arch Books, which published John Henry and a stack of other graphic tall tales, does a fantastic job of making the book a valuable resource for the classroom. There is a glossary of vocabulary words in the back (including some railroad terminology that might be difficult for young readers). There is an interesting feature, too, in which the truth and myths of the story of John Henry are looked at in closer detail, allowing students to think about how the narrative story form of tall tales compliment and expand true historical events and times.

There are also discussion questions and writing prompts to help guide discussions. In particular, students could research the times in which the railroads were being built, and examine not only the human toll it took on workers to lay the lines, but also how the railroad system opened up our country to population expansion and therefore, access to rich resources. Students might also read the picture book, MIKE MULLIGAN AND HIS STEAM ENGINE, for a look at how yet another era came to an end later on and how the new is always replacing the old.

A reader’s theater kit is available from the publisher.

In my view, every classroom should have a few tall tales on the shelves and those titles should be more than Paul Bunyan and Johnny Appleseed. This book –– JOHN HENRY: HAMMERIN' HERO –– is a story that is rich with character, setting and heart. And given how little we talk about characters emerging from slavery with power and resolve, as John Henry does here, this book might open up some discussions. I highly recommend this book, and think it is most appropriate for the elementary and middle school classroom.
Posted by Mr. Wilson at 8:51 PM