I’ve always wanted to like Native American mythology; I’m sympathetic to the grousing that occurs when people realize that so much more time is spent in school on following the exploits of Zeus, Hades, Poseidon, and the gang than on the homegrown gods and monsters native to our own land. Why should we care more about Odysseus’s wanderings around Ithaca when we don’t know about the stories of the Coyote and Opossum?
I have to admit, however, that I get more enjoyment out of the Greek myths and sometimes find Native American myths obscure and difficult to connect with. Some Native American myths seem to be shaggy dog/just so stories and others lack the kind of characterization and dramatic tension that I expect from good storytelling. But I don’t want it to be like this.
One inescapable aspect of this is class and culture. Studying Greek people and their lives, considering the impact their culture has had on Western civilization, has a sort of snob appeal, a feeling that what you’re learning is very important – even if what you’re learning is more or less about a randy sky god impregnating a series of unlucky mortals. Again, this is nothing to be proud of.
When we teach Greek mythology, we also find a nice neat hierarchical set of stories and characters that are easy to quiz (How are Ares and Aphrodite related?), whereas the variety and different tribal traditions that Native American myths come from make the evaluation process more complicated. Somehow, teachers need to have the resources to help students relate not only to a Western heritage that only a percentage of our students experience directly, but also connect with a tradition with direct connection to the land we live on.
The recent graphic novel TRICKSTER by a collection of collaborators is the most successful attempt I’ve seen in quite awhile and yet when paired with a graphic novel version of Greek myth such as Athena: Grey-Eyed Goddess by George O’Connor, you can still see the difficulties mythology teachers face in giving Native American myths their due.
TRICKSTER collects tales from many Native American traditions and employs a pool of artists to enact stories revolving around the Trickster figure in a variety of ways. The Trickster figure sometimes takes an animal form, other times a human form, but in all of them the Trickster uses cleverness or guile to manipulate or defeat stronger or more powerful creatures. Some of the stories seem cartoonish and geared for younger-readers (for instance, “How the Alligator got his Brown, Scaly Skin” is drawn in bright, primary colors and features a cute little bunny rabbit threatening the alligator with “Mr. Trouble”). Other stories have more intricate art and feel geared more towards at least middle school readers (“Rabbit and the Tug of War” is drawn in a beautifully subtle and shadowed monochromatic brown). A school district that had a substantial war chest for books and a desire to connect students to Native American mythology would have ample reason to choose this anthology. 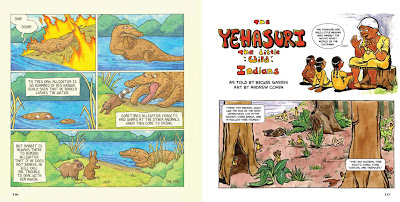 Example of cartoony TRICKSTER art.
Other attempts at using pools of artists have often left me feeling cold. The Graphic Classics sets that swoop down on famous writers (such as Ambrose Bierce are the most prominent example of this. The results of these collaborations are often unwieldy and difficult to love. Even when individual parts are strong, others are not so much. TRICKSTER avoids most of these problems, but I still wish TRICKSTER had a more coherent and clearer way to teach the book.
Therefore, if we pair TRICKSTER to the OLYMPIAN series from George O’Connor, I suspect that students will have a hard time not preferring the Greek tales. ZEUS is action-movie intense with big panel scenes of Kronos swinging a giant sickle at a soul-patched Zeus, sprinkled with lots of POWs and BANGs. ATHENA, because her stories are shorter and less elaborate, is a collection of vignettes about Zeus’s daughter and less like a traditional movie arc. Still, O’Connor makes good use of the most dramatic, most superhero-y aspects of Athena’s myths: see Athena spring out of Zeus’s head clad in armor and holding a spear (ouch!); see Athena defeat and skin Pallas the Gigante; see Athena condemn Arachne to a life with 8 legs. Depending on your tastes, the whimsical and more subtle TRICKSTER tales might not be able to compete. 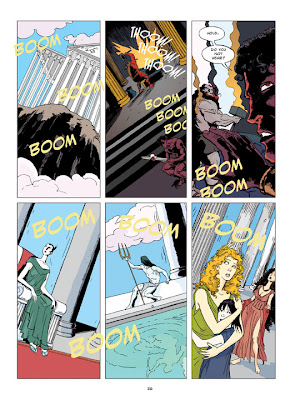 Example of ATHENA art.
When we put the books together, though, we (and hopefully our students) start to see some interesting differences between Greek and Native American myths. The Olympians are constantly battling Zeus’ mother Gaia who is upset at her son’s treatment of the Titans. The Trickster stories, on the other hand, seem much more in tune with nature and less in opposition. In my ideal classroom, I’d have a class set of both books and a request on order for a graphic novel version of the BHAGAVAD-GITA. 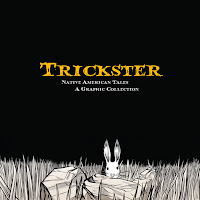 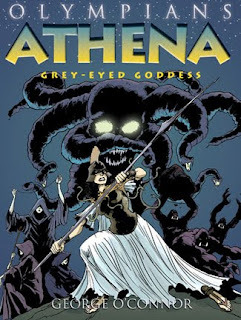