AN INVINCIBLE MAN OF SCIENCE AND TECHNOLOGY 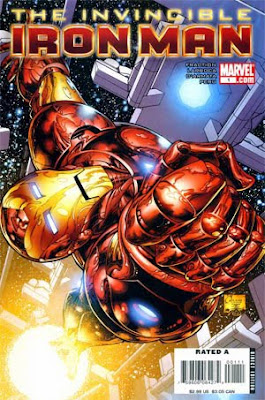 I have never really been an IRON MAN fan. Not that I had anything against Tony Stark, His tale never interested me all that much. Other superheroes caught my eye more. To tell the truth, I tend to be attracted toward independent comics titles.

The feature film of 2008 made me rethink my apathy for the red and gold guy, but I still didn’t pick up the comic. Last year, I did buy the IRON MAN: ARMOR WARS #1-4 thinking it might be a good title for kids. It is except for the single scene depicting a gun and gun violence. Our elementary children are so conditioned to the “no guns at school” policies that they will heartily complain about “inappropriateness” if a firearm is depicted in a comic. Make no mistake: Elementary-aged children know and use the word “inappropriate”. So I probably won’t take ARMOR WARS to school knowing it will cause the kids some distress. I have plenty of high quality comic lit for young ones.

I kept seeing that pesky free copy of INVINCIBLE IRON MAN #1 sitting on the counter at my local comic shop. My comic guy and I started talking and he sang the series’ praises, giving big kudos to writer Matt Fraction. So I took it home and read it.

When I bought my iPad and downloaded the Comics (by Comixology) and Marvel apps, I noticed several IRON MAN titles offered. Why not. I bought a couple to test things out. I read the 2004 series first, which was the pivotal “Extremis” storyline written by Warren Ellis and digitally painted by Adi Granov. Hook, line and sinker, right down my gullet. I downloaded all of the above IRON MAN titles available on the iPad:

For the next few days, I read at night instead of watching television. I read while working out. I read IRON MAN while waiting for my daughter’s guitar and gymnastics lessons to finish. I read and read and read. I’m now wishing the entire current INVINCIBLE line was available on the iPad. I may have to track down a trade paperback or hardcover version of the series. It’s just that good.

None of the comics I read involved War Machine, which is too bad because I want to know more about that character and how Rhodey, Tony’s right hand man, became the machine gun-wearing beast. I don’t just want to know. I can go to Wikipedia for that. I want to experience it.

Because of the movie franchise, I think it’s important to use IRON MAN in the classroom now, so that teachers can flush out the literary themes of Iron Man, his role during the Cold War, and his reinvention for the war on terror. 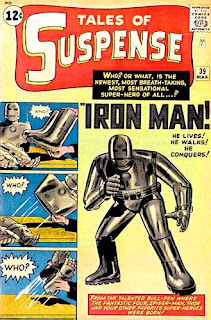 First appearance of Iron Man
I also envision a big Iron Man poster hanging on the wall in a science or technology classroom to promote the link between science fiction literature and real world applications – cultivating a new and exciting engagement in technology and science. Nano technology, cybernetics, human-machine interfaces, voice control, and many other technologies are used in IRON MAN. It was not that long ago that the iPad was more Star Trek than reality. The dreams of geeks are what make fiction come to life and that begins with a love of science and technology, and a desire to create. It’s teachers who often spark, promote, or instill such destinies. It all starts with excitement and interest and we can build that using, among other things, comics.


CHRIS’ RECOMMENDATION:
Highly Recommended
Posted by Mr. Wilson at 7:08 AM

I really love your site! I teach high school English and grew up with a healthy appetite for comics and graphic novels. Iron Man is great character to examine when you think of how real events in the course of history inspire fictional characters.

I was recently thinking that Invincible Iron Man would make an excellent series for use in the classroom. It's good to see that I'm not alone in this.