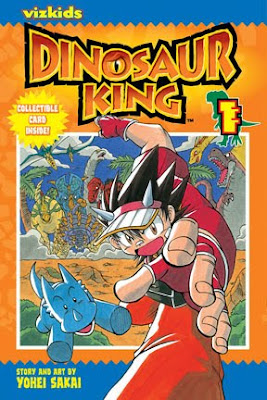 
STORY SYNOPSIS
Max and Rex are best friends who enjoy excavating for dinosaur bones. One day while searching for artifacts, Max comes across a tablet, one that transports him back and forth in time. Max’s first jaunt took him into the Jurassic period where he discovered the Alpha Gang’s evil plot to go back into time and use the mythic power of dinosaurs to come back to our time and take over the modern world. It is up to Max, Rex and some dino-friends to stop Dr. Z and his minions and single-handedly save the world.


REVIEW
Already a cartoon on the CW 4Kids network and a collectible card game, DINOSAUR KING is also now a manga comic series for elementary and young middle school-aged kids. The book is presented in the original Japanese comic format. That is to say, it is read from right to left – for Americans that means the back is actually the front. It is a non-issue for kids and it takes no time for adults to adapt to the format. So don’t let that scare you.

DINOSAUR KING is a fast-paced, action-packed story. The story pushes the reader from action scene to action scene, all but skipping everything but the most superficial aspects of character development. One can hardly turn the pages fast enough to keep up with the narrative. I do not mention this as a negative aspect, but merely to provide it for informational purposes. The book is not designed to delve into the complexities of the human condition.

One aspect of manga that I have come to enjoy is the hyper emotional illustrations of the characters. DINOSAUR KING certainly keeps up that tradition. When Max is scared, upset or emotional, he is illustrated in such a way to overemphasize his emotional state.

On page 150, Max is pondering his ability to speak with dinosaurs. He surmises that his ability is due to the fact that he loves dinosaurs so much. His head takes up half the page and his toothy smile nearly one-third of his face. It is abundantly clear that Max is happy.

On page 157 Max is dashing from a herd of run amuck dinosaurs set to kill him. In this scene, Max’s mouth takes up two-thirds of his head, and his teeth are jagged and pointy with huge, round eyes. It is an element that takes time to get used to, especially if the reader is a committed American comic reader. However, the more manga I read the more I appreciate and enjoy the expressiveness of manga illustrations.

Some of the action scenes are muddy, making it hard to discern the movement or technique used to defeat a character or creature. There are a few instances in which the closure between panels is so broad that I had to go back and make some inferences as to what occurred. All of these issues – emphasis on action over character, murky fight sequences, and disconnectedness between panels – may be quite purposeful on the part of Sakai to create a story that is geared toward a certain demographic, providing those key readers a book that appeals to their need for bullet train reading, fight scenes, and clear good-versus-evil delineations.

DINOSAUR KING is a book meant for kids who love dinosaurs, and seems designed with boys in mind. The pace and the art make it easy for all kids to read and love.


IN THE CLASSROOM
Manga is a very popular form of comics especially with kids. It is a niche comic form unto itself and has a strong following. The break-neck pace of DINOSAUR KING, strong action, and the short chapters are of particular interest to reluctant and struggling readers.
DINOSAUR KING also has application in the Special Education department. Many persons who have a diagnosis on the Autism spectrum struggle with understanding body language and reading facial expressions. Manga, with its hyper-expressive nature, may be very advantageous in instructing students on decoding our complex and hidden nonverbal messages.


CHRIS’ RECOMMENDATION:
Recommended
I especially recommend this title for readers in grades 2-6 who need a lot of action sequences to hold their attention.