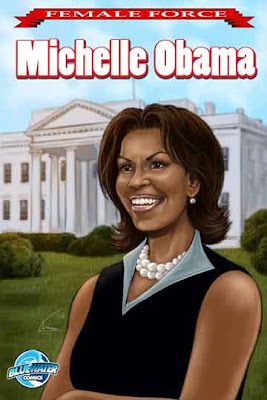 Only a cursory overview can be wrought from 22 pages of information; keeping that in mind the nonfiction narrative gives readers a nice look at America’s first African American First Lady. Based on this piece alone, the driving force behind Obama is her endless search for social justice for persons of color and those in poverty. This descendent of American slaves worked hard to achieve her goals, coming from a middle class home with a working class and politically active father.

Despite the fact that her father was a janitor, she has been criticized as elitist because of her Ivy League education. Furthermore, her master’s thesis was scrutinized and, according to this book, misunderstood as segregationist because of her exploration of race and class.

Obama’s work with those in poverty was formed by early experiences: Mayor Daley’s “shoot to kill” riots in her hometown Chicago, hearing Rosa Parks speak at the Third World Center, and attending a speech from one of the Scottsboro Boys. During college she began advocating pro bono with those living in poverty. Her detour working as an attorney for the entertainment industry was unfulfilling and she left it to continue her work in social justice (with a significant cut in pay to do so) and also to work with her husband and his political endeavors.

Bailey tells his story using a mix of first person and second person narratives. It works fine in few instances, but is mostly a hindrance, a sad fact because the information presented is incredibly interesting. Unfortunately, her story is somewhat obscured by the insertion of the writer as a character in both text and illustrations. This comic could act as a jumping off point for further study.


ART REVIEW
I did enjoy Howe’s use of silhouettes against a colorful background. Those panels set the tone for Obama’s philosophy. The interior art can come off a bit cartoony and flat because of the lack of substantial shading, especially in the faces. The character’s hands seemed rushed and oddly pointed.


BE AWARE
The comic shows Barack with a cigarette in his mouth, an issue that has been widely reported in the new, but a portrayal that can be problematic for some schools.


IN THE CLASSROOM
This comic is right at home in any class studying minorities, feminism, politics or history – suggestions which seem a bit obvious. I do think the high school English class might use MICHELLE OBAMA to flush out the author’s use of different narrative styles. As well, a teacher could use the title to explore subjectivity and objectivity in writing. What happens to the writer’s objectivity when he or she becomes a character in the biography?


OTHER INFORMATION
Blue Water Productions has made a name for themselves with their biography comics. I recommend teachers check out their site for more comic biographies.