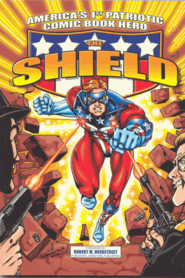 
STORY SYNOPSIS
In January 1940, in an era known as the Golden Age of Comics, a new superhero debuted in the pages of Pep Comics #1. This character was the first to completely embody the ideal of patriotism. Known as The Shield G-Man Extraordinary, this superhero worked for the FBI, under J. Edgar Hoover himself, stopping the very forces that would destroy America and protecting the very fabric of democracy.

Initially fighting fictional characters known as the Stokians and Mosconians, the story line changed to reflect America’s campaign against the Nazi regime as America engaged in World War II. Youngsters were encouraged to join the Shield G-Man Club and even received an official membership card.

The Shield was freedom; he was the flag; he was a government-issued crusader for justice and he wore the stars and stripes to prove it.


REVIEW
I ordered THE SHIELD because I wanted to be able to give students a chance to read Golden Age comics and be safe in their interests of war. Believe me, many fourth grade boys are very interested in war, yet many schools and parents are fearful of the influence. With brightly colored pages, densely packed panels, and action that is high paced but not overly violent, kids can be safe in their investigations.

The stories are, at times, ridiculous or fantastic, but reading the comic in context allows for that experience to be rich and enjoyable. This comic and others from the Golden Age are the foundation of American comics and the reader needs to consider the time period, the history, and the culture in order to appreciate the story.

I found THE SHIELD to be fascinating in its thick patriotism, cultural adherence to classic American ideals, and its unending trust of government officials, which starkly contrasts with today’s general suspicion of all things governmental. In that light alone, THE SHIELD was worthy of study. However, I also connected to the roots of comic literature – the color, the art style, the panel arrangement – and it gave me a feeling of closeness to early comics. It did the same with my students who read it, who are now more likely to read and enjoy vintage comics.

In fact, I have a handful of boys who, after reading it and sharing it with their friends, are asking for more war comics and old comics. Asking to read, begging to read more, is my top priority. Once kids want to read, they can learn all those skills to make them better readers.


BE AWARE
These stories are full of fisticuffs, poor treatment of bad guys, and bullets (which bounce harmlessly off the protagonist’s chest.