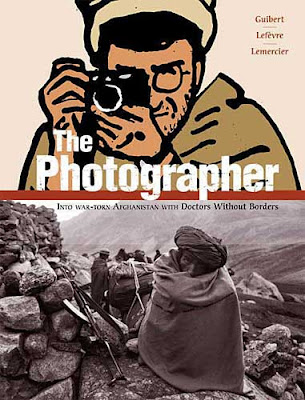 It's not often that I'm struck by how being a teacher is preferable to being just about anything else. Reading Emmanuel Guibert's glorious THE PHOTOGRAPHER, I realized pretty quickly why – despite all of the glorious stories of Margret Bourke White catching just the right shot of the Chrysler
building – being a photojournalist is not likely to be my second career.
In the graphic novel, French photojournalist Didier Lefèvre treks from Pakistan through the mountains of Afghanistan during the height of the Soviet occupation in order to document the heroic efforts of Doctors without Borders to establish a clinic. He braves dizzying mountain climbs, blizzards, recalcitrant donkeys, sometimes unreliable mujaheddin, Russian carpet bombers, and a nasty case of furunculosis (http://en.wikipedia.org/wiki/Boil) which claims 14 of his teeth and leaves painful boils all over his body. He takes over 4,000 photos on the trip but only six are published. Finally, just as this graphic novel is published and his work begins to find a wide audience in France, he dies in 2007.

I think I'll plan my lesson on metaphors and similes now. 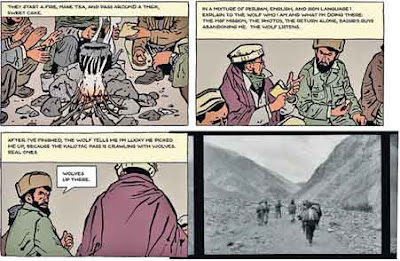 The graphic novel, though, is nothing less than a revelation. Guilbert intersperces the astonishingly beautiful work of Lefèvre with a illustrated graphic narrative, filling in the gaps between the photos to give context and story to the photographer's experience. For instance, one of the most luminous photos is of a donkey and two mujaheddin. Lefèvre comes off as a dedicated and passionate artist who is willing to do everything from choke down oily walnut tea to traverse mountain passes in wild blizzards to bring back his photos. He doesn't always depict himself as a saint as several times his irritable impatience leads him into more trouble than was necessary (at one point he decides to leave Afganistan alone rather than wait for his colleagues to return through a more roundabout route). But Lefèvre's dogged quest for photos and understanding is inspiring. 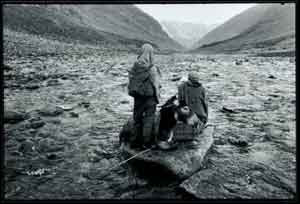 ART AND PHOTOGRAPHY REVIEW
The photography is the wow factor here. When Lefèvre thought he was going to die in a blizzard, he describes taking what he thougth would be his last shot "to let people know where I died." The resulting black-and-white photos are illuminating and revelatory, perhaps more so because the art panels surrounding them are so simple and unprepossessing. They tend towards neutral colors with only a few splashes of color. It is, though, the clever interspersing of photos that works best. Lefèvre will often talk about the preparations before the shot before revealing it, or connect the panels of participants with photos of them. By the end, it feels as if the story couldn't be told in any other way.


IN THE CLASSROOM
Among other things, THE PHOTOGRAPHER suggest an entirely new format to tell stories. Students could join with photography students and tell narratives that combine art and photography in startling ways. For example, imagine using a classic English teacher assignment of interviewing war veterans combined with illustrations of the story the veteran tells. Even, say, a job shadow where students follow someone in a particular occupation could be rounded out by the joint photo/art combo. Teachers of social studies or lit teachers with a war unit could use the book to show another side to the Russian occupation or to gain insight into Afghanistan.