IS THERE AN APP FOR THAT? 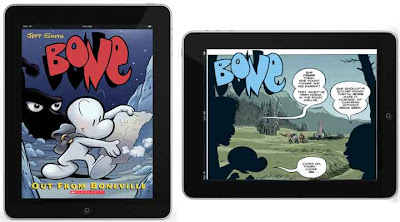 With the introduction of Apple’s new iPad, Wednesday was a big day for gadget heads, on-the-go email and Internet users, social networkers, bloggers, book readers … and comic lovers. Digital comics have been around for a little while. I even have some on my tiny little iPod as does our own Kevin Hodgson.

It is cumbersome to read a comic on a handheld device, although people do it all the time. It’s not the best experience for me. The iPad, however, offers a platform for a robust comics reading experience, one in which a reader can transport hundreds or even thousands of full color comics in a device that is half an inch wide, weighs 1.5 pounds, and has a 10-hour battery life on a single charge.

Comic publishers and creators seem enthusiastic with the introduction, but there is caution. Undoubtedly, the device could significantly affect local comic book stores, especially with individual monthly comic subscriptions. P.J. Bickett, president of Archaia Entertainment (publishers of MOUSE GUARD among many others) speculated that retail stores would have to switch from monthly comics to more trade paperback sales. After all, there surely will continue to be a market for printed comics from collectors and paper lovers. There is a special place for the holding and smelling of print, the rubbing of pages between fingers, the sound of the page flip, the presence of literature on the family bookshelf.

I am optimistic about the iPad as I see it a great way to get comics in the hands of more readers. Bickett said it first, and I agree that Apple’s innovation can pave the way for publishers to invest in more off-Broadway comics and also give a longer shelf life to high quality, independent or alternative comics that might not have found a market in print.

There is great potential for a school-based comics reading club (or traditional book club for that matter) to invest in 30 iPads pre-loaded with hundreds of titles. Students could even have an iPad assigned to them that already caters to books geared to that specific student’s preferences or literacy needs.

I am making one prediction now. I suspect upcoming versions of the iPad will have an intelligent note-taking, hand writing translator. One in which a student could hand write notes in the margin of a book or comic then turn those handwritten words into a typeface and save it, with the option of printing the notes later. The push of a button or swipe of a finger would toggle between a note page/book page and the full screen book. Even handier would be a wireless download for the teacher so he or she could then view the student’s notes or graphic organizers to assess for understanding as the students read. A teacher could also assess to see if a student actually read the material.

Going back to my support of dual texts (traditional book with comic adaptation) this would eliminate the fear among teachers that students might only read the comic and not touch the original novel. With a notes page, the teacher could assess by reading the students own notes and seeing if the student can compare and contrast the two formats.

There’s not an app for that yet, but there could be. Note to app creators, I would love to be a consultant on such a hulking undertaking. I have other ideas as well.

(Newsarama has a great story collecting responses from many comic publishers and creators. Marvel’s reaction gets its own story. To date, DC has not commented.)
Posted by Mr. Wilson at 4:13 PM