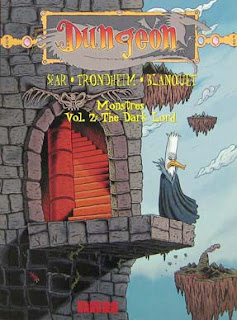 Periodically, I run into a book that has a strange dichotomy being either questionable or unsuitable for the classroom on one hand, and at the same time diabolically enjoyable on the other. For me DUNGEON is one of those strange books. It has enough questionable material (cursing, violence, sorcery and sex or brief sexual situations) to make a classroom recommendation difficult if not painful.

DUNGEON, at least the volume I read, was one of those books that slowly punctured my side with its dragon claws, clasped onto my ribs and held tight. By the end of the book, I was sad to see the story end. In fact, I was eyeing the other volume sent to me (DUNGEON: ZENITH VOL. 3, BACK IN STYLE) and contemplating if I had the time to spare to read it, too. The large queue of books to review sitting on my shelf ultimately won out. Dang. I’ll come back to this book in a future review.

Fans of fantasy and parody will delight in the swashbuckling swordplay and sorcery, map hunting, world-saving, planet-exploding nature of the DUNGEON universe. But teachers must take care to ensure that DUNGEON is appropriate for their classroom, school and community. The cursing is pretty mild by today’s standards (butt, crap, hell, damn, damned, dammit, and the ever-clever damn crap).

On page 24 Nicole the cat tells Marvin that they are sleeping together and the jealous Zakutu, asks Marvin if her encounter with him was simply a one-night stand. On page 26, one panel depicts Marvin and Nicole in bed together. Of course, there is all manner of sorcery and magic to contend with. There is also some level of sword-stabbing and throat-opening violence. It’s mild, along with the cursing, but it is present. The mixture of violence, magic, brief sexual scenarios and light profanity make for a straight-from-the-oven loaf of hot controversy in many communities.

On the other hand, I can see some out-of-the-mainstream middle school and high school students latching onto DUNGEON and holding on for dear life, laughing and cheering their way through the entire series. Why not? DUNGEON is absurd and fantastic and an all around hoot while still offering a literary journey.

Teachers could make use of DUNGEON, especially to hook those fringe students with a clever wit and desire for serious action-adventure. The series is inspiring; it makes me want to write. How engaging would it be for students to read the series then write their own epic poem about one of the many characters in the DUNGEON mythos. A student-created poem about a character would link back to our canon and the classic poems of Homer and others. Using modern comics to connect to the classics – it doesn’t get any better than that.


There are numerous other titles in this series originally published in French. The DUNGEON books translated into English include:

I've been a fan of both Tronheim and Sfar for a while, but yeah, there's something just a little different about the French sense of humor!

(You've probably already checked out "Tiny Tyrant", but that's a relatively clean one of Tronheim's. Maybe "Harum Scarum", too.)