CLASSICS ILLUSTRATED: THE RAVEN AND OTHER POEMS 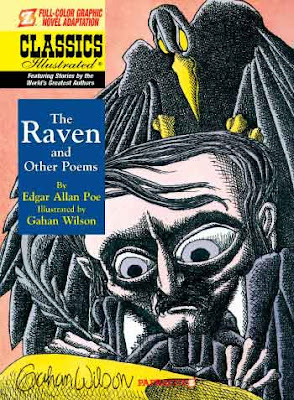 
REVIEW
Poe is a masterful poet of the macabre and a book of his for elementary children might seem a bit overreaching. However, Wilson’s illustrations are composed of bug-eyed, creepy cartoons infused with a calming pastel wash, making his art queasy yet palatable to the young reader. It really is a nice dichotomy between horror and heart, and tones down the intense emotions and imagery of Poe for a younger crowd.

Interestingly, what we have presented in THE RAVEN AND OTHER POEMS is not comic litrature in its true sense. It is merely an illustrated picture book of poems. Not that there is anything wrong with that. I would offer it to my daughter and consider using it to talk about the difference between comics and picture books.

Still, there is no sequential art. What we have is a series of poems each presented with an often singular picture depicting an entire scene, rather than an art-infused work in which the illustrations demonstrate some element of time and are just as important as the text. Despite that fact, I enjoyed the book. I simply wish it was more … comicy.


BE AWARE
Gaham Wilson, the illustrator, has created work for magazines including Playboy. The publishers chose to mention that tidbit twice in a book geared toward children – a fact that I find disheartening considering the target audience.


IN THE CLASSROOM
Poems are important additions to our rich literary history, yet so many elementary teachers stick to female-oriented, flower and rainbow poetry in their classrooms. This undoubtedly alienates boys right off the bat. There is so much more to poetry than unicorns, baby birds, love and lilies. I would go as far as to claim that while I adore Shel Silverstein, there are many other poets who write for children that we should focus on. As teachers, we should explore other poets, free verse, concrete poems, poems about basketball, dragons, monsters, pizza, pimples, muscles, cars, and heroes. We should even consider death and pain. Poe knows those last two quite well. As a teacher who uses comics on a weekly basis, I find concrete poems an especially interesting form of poetry that is closely related to comics.


CHRIS’ RECOMMENDATION:
Not Recommended
Had the publishers insisted on a comic adaptation of the book, rather than a picture book, I quite likely would have highly recommended the book. Up to this point, I have never been disappointed in a Classics Illustrated publication by Papercutz.

The fact that they mentioned the men's magazine twice means I cannot recommend the book as is. I would have no problem using it in the classroom with a document camera, but I would not just hand the book over to kids with that title reference in it. The parents in my district would call the principal.

Email ThisBlogThis!Share to TwitterShare to FacebookShare to Pinterest
Labels: Not Recommended